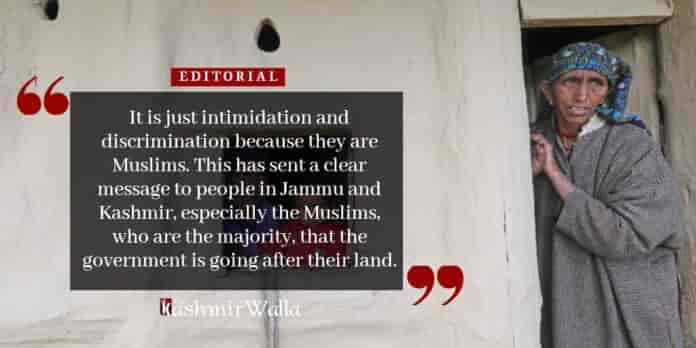 In the aftermath of the formation of the new union territory of Jammu and Kashmir and the imposition of new domicile and land laws, the next surprising step by the government was to evict the Gujjar-Bakarwal community from the forest areas. The Bharatiya Janata Party (BJP) government had long been accusing the two political parties — National Conference (NC) and People’s Democratic Party (PDP) of encouraging corruption and loot of land under various schemes to elite businesses or families. That argument may be valid and those who have misused power over the years must be made accountable. But targeting the nomad community of Gujjar-Bakarwals by forcing them to leave their ancestral huts in forest areas won’t bring back any looted land. It is just intimidation and discrimination because they are Muslims. This has sent a clear message to people in Jammu and Kashmir, especially the Muslims, who are the majority, that the government is going after their land. It has also strengthened this apprehension of people, especially Kashmiris, that the move to revoke Article 370 and 35A and then changing land laws was nothing but actions to change the demography of the region. These administrative decisions will serve little in the development or political stability of the long-pending volatile region of Jammu and Kashmir. The government should take this more seriously as it is not just causing further discord but also communalizing the region by these actions. While the Gujjar-Bakarwal community has been a strong pillar of the region’s social fabric and to preserve their culture it is forests that play a significant role. By taking away the forests from them, even when a central forest act should be in place now, the administration is neither helping people nor itself. The government in New Delhi and the local administration should immediately seize these activities and stop targeting the Gujjar-Bakarwal community or anyone else in the garb of going after the corrupt politicians or businesses.