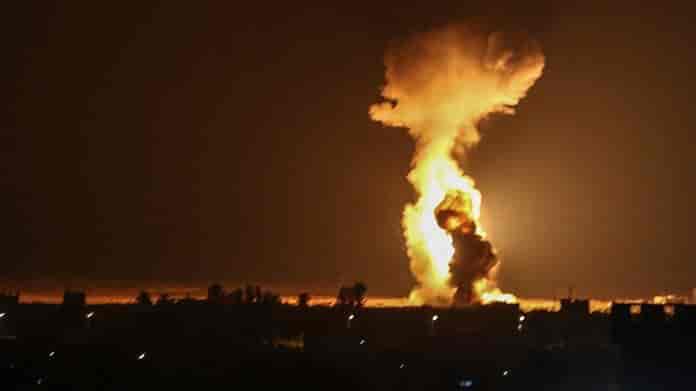 Israeli warplanes have bombed Hamas sites in Gaza in response to incendiary balloons launched from the Palestinian enclave that caused brush fires in southern Israel, according to its military.

Al Jazeera reported that there were no immediate reports of casualties in the air attacks that targeted what the military said early today was a weapons production facility and a rocket launch site belonging to Hamas, the group that governs Gaza.

In a statement, the Israeli army said fighter jets attacked “a Hamas weapons manufacturing site in Khan Younis as well as terror tunnel entrance in Jabalya”.

“A Hamas underground rocket launch site that is located adjacent to civilian homes and a school in Shujaiya, was also struck,” it added, saying “the strikes were in response to Hamas launching incendiary balloons into Israeli territory”.

Since an Egyptian-mediated ceasefire halted 11 days of Israel-Hamas fighting in May, groups in Gaza have sporadically sent incendiary balloons into Israel, drawing Israeli raids on Hamas facilities.

Palestinians say the balloons aim to pressure Israel to ease restrictions on Gaza and permit aid to reach the territory.

Cross-border violence has spiked despite an Israeli announcement last week of a resumption of Qatari aid to Gaza, a move that had been seen as bolstering the fragile truce.

More than 250 Palestinians, many of them civilians and children, and 13 Israelis were killed in the May assault on Gaza, during which Israel carried out relentless air raids across the coastal enclave, prompting Gaza fighters to fire rockets towards Israeli cities.

Israel keeps Gaza under blockade, tightly restricting movement out of the territory that is home to two million Palestinians.