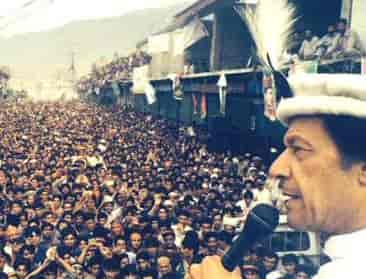 Elections were held on 23 seats of the third legislative assembly on Sunday amidst tight security due to the threat of militancy.
Unofficial results compiled by the various media outlets showed that PTI won at least 8 to 9 seats, but it was still well short of a majority to form the government.

The official results were still not known as election authorities may take some time to announce the final outcome.

Polling was due on 24 seats but it was postponed on one seat after the death of one of the contestants.

As many as 330 candidates, including four women contested the election.

Out of 1,141 polling stations, 577 have been declared sensitive and 297 highly sensitive. Over 15,000 security personnel from Gilgit-Baltistan, Punjab, Khyber Pakhtunkhwa, Sindh and Balochistan were deployed at the polling stations.

It is the third election for the current legislative assembly after political reform introduced in 2010.

Traditionally, the party ruling in Islamabad have won the Gilgit-Baltistan polls. The first election was won by PPP when it got 15 seats, followed by PML-N, the then ruling party, in 2015 when it won 16 seats.

The voters kept the tradition but with a difference as PTI failed to get an outright majority. PML-N emerged as the biggest loser as it ruled from 2015-2020 and was popular in the region.

Both the Opposition parties PPP and PML-N have alleged poll rigging.

In a ruling earlier this year, the Pakistan Supreme Court allowed Islamabad to amend a 2018 administrative order to conduct general elections in the region. The Gilgit-Baltistan Order of 2018 provided for administrative changes, including authorising the prime minister of Pakistan to legislate on an array of subjects.

Following the verdict, India issued a demarche to a senior Pakistani diplomat in New Delhi and lodged a strong protest over the apex court ruling.

India also clearly conveyed to Pakistan that the entire Union territories of Jammu and Kashmir and Ladakh, including the areas of Gilgit and Baltistan, are an integral part of the country.

The polls in Gilgit-Baltistan were to be held on August 18, but Pakistan’s election commission on July 11 postponed them due to the coronavirus pandemic.

The five-year term of the previous assembly had ended on June 24, bringing an end to the five-year rule of the Pakistan Muslim League-Nawaz (PML-N).

Previous articleHigher reaches of Kashmir including Gulmarg receive more snow
Next articleAttack on freedom of press should be opposed by one and all: Vice President