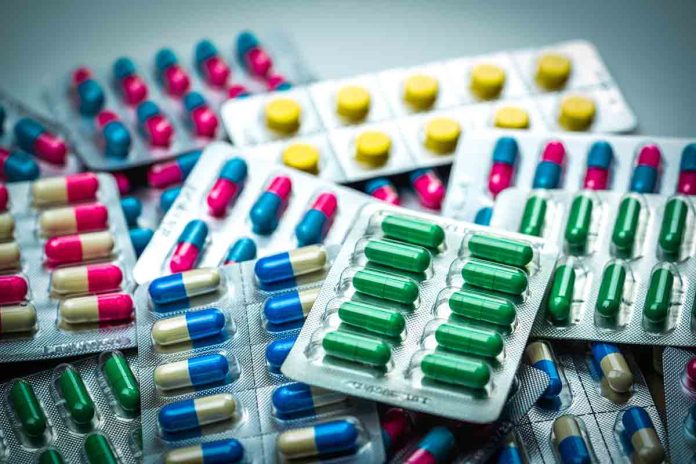 Srinagar: Antibiotics and painkillers like Dolo, Azithromycin, Nicep, Levocitrezene are selling like hot cakes in Jammu and Kashmir as self medication shows an increasing trend since the emergence of Covid-19 third wave.

Experts and doctors told the local news agency—Kashmir News Observer (KNO) that people, whoever, are having any symptoms avoid visiting hospitals and prefer to go to chemist shops and resort to self medication.

They said since the beginning of Covid-19, people have resorted to self-medication but it has increased manifold in the third wave.

They said that the positivity rate currently is very high but around 90 percent of the positive patients are in home isolation and without consulting doctors most of them are resorting to self-medication.

“Taking antibiotics too often or for the wrong reasons can change bacteria so much that antibiotics don’t work against them. This is called bacterial resistance or antibiotic resistance. Some bacteria then become resistant to even the most powerful antibiotics available,” experts said.

According to the Centers for Disease Control and Prevention, up to one-third to one-half of antibiotic use in humans is unnecessary or inappropriate.

Dr Owais Ahmad from GMC Anantnag said that every other person is suffering from flu like illness these days most likely Covid (Omicron Variant) until proved otherwise with common symptoms being itchy, scratchy throat (most common), running nose, fever, dry cough while some people have associated body aches and headache

He said that the symptoms usually resolve within a week but the matter of concern is self medication as people are taking medicines on their own by visiting local medical shops (which otherwise need to be strictly taken under medical supervision).

He requested people to avoid self medications which can be detrimental especially in those who are suffering from chronic diseases like HTN, diabetes, chronic liver and kidney diseases

“Antibiotic resistance is a huge concern amid self medication with antibiotics due to inappropriate dose and regimens,” he said, adding that overdose of antibiotics damages the liver mostly.

Owais said that every patient doesn’t need paracetamol or antibiotics and people should avoid self-medication at any cost which otherwise can prove dangerous as every drug becomes poisonous when it is overdosed.

“I request people to strictly adhere to Covid Appropriate Behavior (CAB) especially wearing of masks and maintaining physical distance besides that take a good protein diet apart from boosting your immunity by taking ample fruits,” Owais said. “People are also requested to get themselves vaccinated as soon as possible as both morbidity and mortality rates are significantly lower in vaccinated people.”—(KNO)

Previous articleTight security, aerial surveillance in Kashmir ahead of Republic Day
Next article28 govt teachers terminated during past two months in J-K