“Do you have guts to peddle marijuana?” 27-year-old Jordan asked, his eyes swollen up. “It is pretty easy in Kashmir. All you need is to learn how to talk on [government forces’] checkpoints.”

Jordan, as he is called in the underworld of drug peddlers, laughed.

It has never been in past many years that Jordan moved around without a block of charas in his jacket’s inner pocket.

Jordan is a pharmacist by profession and a peddler by choice and between the two he has forgotten who he really is. He has moved around flawlessly and without fear, experienced by the six years since he first started to peddle.

In 2014, when he took the first risk, he was standing on the city’s Pantha Chowk bypass awaiting his first consignment and his legs shivered in anxiety.

It was a parcel for New Delhi’s cannabis market, where Jordan would often go during his college days in the national capital. Jordan, and his two friends, got into contact with a small-time collector in north Kashmir’s Pattan.

“It was heaven: naturally grown Attar. It is our Malana Cream (a reference to India’s arguably best quality hash),” Jordan told The Kashmir Walla. “We had to bring a kg (kilogram).”

When Jordan waited at the bypass, his two friends collected the stuff in multiple blocks — wrapped in dry leaves to keep it fresh. The duo kept it under three layers of polythene, a bottle of perfume over it, before putting it in a school bag.

“Then they boarded a Sumo [taxi vehicle],” Jordan recalled. He received the bag, unwrapped the stuff and sniffed hard for a quality check.

“It was good,” he said before putting the parcel into a government-run interstate bus service. Once the bus reached New Delhi, it was only easier and sold at 75,000 rupees.

However, Jordan didn’t take money for acting as an intermediary in deals henceforth. “I took some amount of charas,” he said. Even if he had taken money, Jordan said, he would have spent it in purchasing more stuff for himself.

Jordan took his first drag at the age of 17; later a failed relationship and “issues of life” fueled his addiction. Jordan soon found the other side of himself in the high that he found to be better. “I was in pain and it helped me,” he said. “Then I saw my other friends in pain.”

Jordan liked it clean: for him, it was spiritual; a gift of nature.

“But some people are after money … they add impurities to the stuff such as Alprazolam tablets, henna, and even boot polish to make extra money,” Jordan said of other dealers whom he despises for peddling adulterated drugs.

“Addicts, who were in pain, were losing money to shit stuff.”

This pained him, Jordan said, his language interspersing between Kashmiri and English. “So I started peddling myself; I’m not in it for money. I see their pain.”

Has he ever peddled heroin? He was furious. “God forgive, that’s wrong.”

Cannabis is in Kashmir’s cultural discourse, historically; the rampant heroin addiction is more recent and with dangerous repercussions. More than half-a-dozen cannabis peddlers and consumers The Kashmir Walla spoke with had dual reactions to this rising addiction: either they disgust it or live along with its existence around.

Heroin, an analgesic derived from the opiate family’s morphine extracted from seeds of poppy, is a highly-addictive drug. It is not locally produced, officials of the Anti-Narcotics Task Force (ANTF) told The Kashmir Walla.

Jammu and Kashmir administration had sanctioned setting up of the ANTF, a wing under the overall superintendence of Inspector General Crime, on 14 May 2020, to fight “drug menace”. Since then, the team has filed four First Information Reports, arrested over half a dozen “hardcore drug peddlers” in the investigations, and seized heroin “worth tens of thousands of crores”.

ANTF is a small team of ten personnel, including officers. A top ANTF cop, whose identity has been withheld upon request, claimed that the cannabis industry in the Valley isn’t king-pin style, wherein a couple of big dealers would control the large networks of dealers.

“It is so much available on the roadside that people don’t even need to grow it,” the officer said.

The cannabis hotspots, the ANTF officer said, have been located in south Kashmir’s Bijbehara and areas of Pulwama and in Sumbal and Hajin areas of north Kashmir. “However, lately it has shifted from the stretch of Bijbehara to Uri; the hotspots keep shifting as police cracks down,” he said. 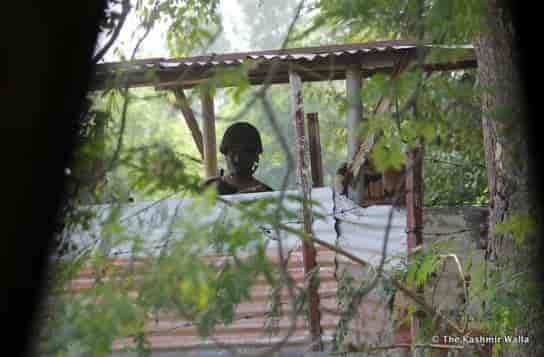 But if heroin is not grown locally, how does Kashmir get it? The police officer replied: “the borders — inter-state as well as international borders”. Though his emphasis is more on the hundreds of kilometres long international border that Jammu and Kashmir shares with Pakistan.

“That’s where nearly all the heroin comes from in Kashmir,” he said. Over the period of time, as smugglers tackle the tight vigilance along the infiltration points to curb the militancy, he said, the methods of the heroin industry have evolved. The classic was to throw it across the fences, in residential areas, where a local handler would collect and pass.

Dealers have gone past these practises, the officer told The Kashmir Walla. “They started digging tunnels across the border and then cold drop a package,” the officer said. “And then send a signal, as they would have already decided, for the local handler to pick.”

Then the police cracked down on them.

Now, it is more random than standard practises among dealers: “sometimes they throw over the border, some local residents are peddling heroin as they graze cattle, while a few are still using tunnels.”

A majority of heroin coming in Kashmir traces roots to the Afghanistan-Pakistan border. “At times, we have seized heroin that had Afghanistan’s seal,” the officer added. Then in the Valley, it enters two types of pyramids: big nexus type – one-to-many, or smaller nexus type, wherein a dealer is peddling to a handful of addicts.

The patients seeking de-addiction have grown in the past six years. The numbers registered at Kashmir’s premier mental health research institute revealed a sharp and sudden spike post-2016 — the year Kashmir witnessed civilian killings and a crackdown amid a summer uprising.

Then Kashmir was locked up again in August 2019; New Delhi clamped curfew and imposed a communication blackout to abrogate the limited-autonomy of the erstwhile state. The patients spiked to 7,420 — more than double in two years — from April 2019 to March 2020.

Dr. Yasir Hassan Rather, who heads the de-addiction center at the hospital, noted that prior to 2016 three out of 100 patients coming to the hospital were taking heroin. The initially unchecked gradual rise has made the addiction rampant, Rather said.

“Now, ninety out of 100 cases are heroin addicts.”

Pilot research led by Rather — wherein he studied Srinagar and Anantnag districts — found that opioid dependence has spread across all the parts of the district. The research found 57 percent of respondents used opioids before the age of 20; and were educated, skilled, and came from economically sound families.

In another important factor of the study, keeping the fluctuating market in mind, Rather put 1 gram of heroin at 3,500 rupees — and concluded that a whopping 3.7 crore rupees were being spent on consumption of opioids in the twin districts.

These days Rather sees thirty new patients every day. “Every patient knows someone who died of an overdose of heroin,” said Rather. “We are sitting on a ticking time bomb. You have no idea what is coming.”

This is just one of the hospitals in Kashmir Valley.

How did Kashmir reach here?

The focus of the police is to track down the big-shot peddlers to crash “the nexus from the top”. An answer to that depends on who is asked. The police officer believes it is the “new way to sponsor terrorism and secessionist activities”.

In July 2018, Amarinder Singh, who heads drug-rattled Punjab, said in an interview: “what is now happening [in Punjab] is strange. One new source of drugs is Kashmir despite so much security.”

Taking a similar line to Singh, the police officer asked: “Imagine, if Pakistan’s ISI (Inter-Service Intelligence) and the army want to sponsor something in Kashmir then what are the ways to get easy money?” Then he answered: “Pakistan procure 15 kilograms of heroin from Afghanistan at — for example — 10 lac rupees; smuggle it to Kashmir and sell it in the market for 70 lac rupees.”

The profit, he said, “is being used to sponsor terrorism and other activities”. However, he believes that “logic is the proof” here.

Jordan, who has been peddling cannabis for a decade and is in a close circle of “H-players” too, gets irked by this conclusion. To him, it is political. “How to destroy a generation of resistance?” he asked, looking at his feet — smirking. “Give them hard drugs.”

However, to Dr. Rather, these factors don’t hold much significance.

“Kashmir is living in conflict; the trauma has a direct impact on the psyche — it makes them more vulnerable to addiction,” said Rather, underlining the 2016 uprising, 2019 clampdown, and COVID-19 lockdown that uprooted any space for “recreational activities”.

“After so much trauma Kashmir had become a vulnerable market that dealers exploit,” he added.

But it is better late than never, Rather noted. The hospital has not only sat down with the police department to decriminalize the de-addiction treatment but is also pushing for rehabilitation rather than punishment.

Police has muscled up in the crackdown too post COVID-19 outbreak. So much so that Jordan is “scared on streets” now. The police often frisk or raids some spots looking for H-players, he said, but often end up getting hold of cannabis peddlers. “They are cracking down. That’s scary; the pressure is there.”

A decomposed body ends father’s yearlong search for his son

"The body is in a very bad state. There is no skin and the neck is completely cut. Only the feet and the legs have some flesh on them."

In burials of minors killed in 2016, ‘mothers died too’

“My heart died that day. I can't forget my own blood. Even if I had a house of gold, it wouldn’t make any difference.”

‘We are fed up… will quit this business’: Jhelum’s houseboat owners in dismay

At around 5:30 am on 5 September, when the Shagoo family was in deep slumber in their houseboat, the...

In near-constant lockdowns, Kashmir’s economy is in tatters

After rowing a shikara for three decades in Srinagar’s picturesque Dal Lake, Ali Mohammad took a loan of five...
- Advertisement -

A decomposed body ends father’s yearlong search for his son

"The body is in a very bad state. There is no skin and the neck is completely cut. Only the feet and the legs have some flesh on them."
Conflict

In burials of minors killed in 2016, ‘mothers died too’

“My heart died that day. I can't forget my own blood. Even if I had a house of gold, it wouldn’t make any difference.”
Crime

‘We are fed up… will quit this business’: Jhelum’s houseboat owners in dismay