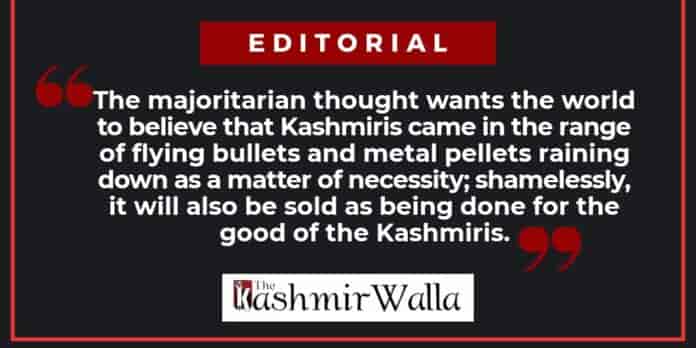 So much has been written about Kashmir and will be written ahead. The discourse has largely been dominated by the magnitude of loss — physical, mental, economical — due to the decades-long conflict. But nothing scares the majoritarian thought as much as the fact that Kashmiris are telling their stories themselves. Here, the majoritarian thought wants to obliterate the stories of the Kashmiris and tell those again, censored, and manufactured to their ideological ends. Kashmiris were neither killed, maimed, nor showered with pellets and blinded, the majoritarian thought wants the world to believe that Kashmiris came in the range of flying bullets and metal pellets raining down as a matter of necessity; shamelessly, it will also be sold as being done for the good of the Kashmiris, even if they don’t realise it.

History is witness to the hijacking and colonisation of narratives of suppressed peoples. A plethora of analysts, experts, and observers, too, have capitalised on Kashmir’s conflict–it includes both Kashmiris as well as the non-natives. They opine views from all sides of the political divide but a selected group of people have often ordered Kashmiris what is right and wrong. This has been a trend in many conflicts in the world. In Kashmir, too, we have seen a rise of such opinion pieces, coming from analysts and now even officials. These opinions, published in several newspapers or online media, have often shown Kashmiris in a negative way and given diktats to local journalists on what they should write and how. Most of it has been about regional political instability, where the writers are either talking about how people should act or what journalists should write about people. In times such as these, it isn’t the press’s job alone to stand up to the emerging Rwanda Radios, it is also for the public to be conscious of the developments and the stagnation of the media. We must remember that otherisation and epistemological violence against a people or a community is the first step to a full-fledged genocide.

The editorial originally appeared in our 7 – 13 September 2020 print edition.

Previous articleGunfight breaks out in central Kashmir’s Budgam
Next articleNever recognised so-called Arunachal Pradesh, have no details to release yet on “abducted” Indians: China