Of frequent deaths in Kashmir’s mountains and ignorance 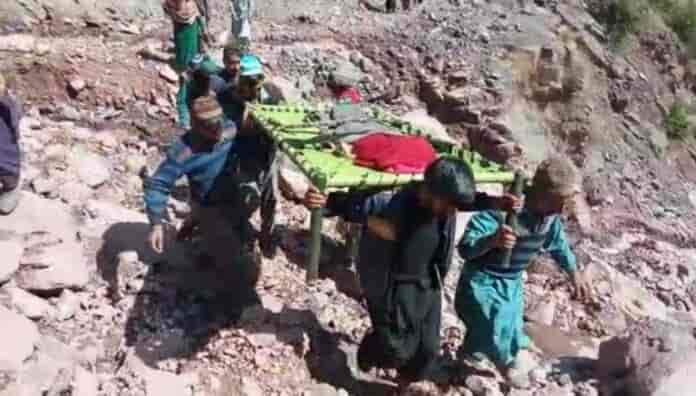 The arrival of March in Kashmir marks the return of rain and fragrance of newly sprouted petals, which had withered in the winter, to the Valley. Juggling between winter gears and warmth of sunlight, Zareena Begum, at her home in the mountains of north Kashmir, was grappling with fear — her body hot as stone.

Begum’s only relief came from cold cloth placed on her head as she struggled with very high fever.

The family awaited a miracle for her fever to drop; that didn’t happen. Nazir Ahmad Dader, her uncle, recalled that the blocked road prompted the men to carry her on their shoulders, on a makeshift stretcher towards a local hospital in Uri.

The 25-year-old from Uri’s Churanda area died en route to the hospital.

Images of men carrying her body through treacherous topology of Uri went viral on social media and sent chills through everyone who could make out from the picture, the agony and helplessness of the family, and the girl, must have faced while she was battling for her life.

Dader alleged that a precious life was lost due to “negligence” of the concerned department. “If the road had been opened with promptitude, a precious life might have been saved,” he sighed.

Deaths of young women, living on the far off areas, due to limping status of infrastructure have trivialised in Kashmir, where the centre has promised to reach out to grass root levels as it develops villages on priority. Both the Bharatiya Janata Party (BJP) and Lieutenant Governor of Jammu and Kashmir, Manoj Sinha, have laid emphasis on the development of villages.

The death of Begum exposes the claims and promises made by both central and regional governments.

Ahead of the panchayat polls in 2018 in Jammu and Kashmir, the BJP had said that empowering the local self-governance bodies will boost development in villages of the state.

The governor, while focusing on the importance of Back to Village programmes — an initiative by the government’s administrators to reach out and hear the grievances — has said that villages will be put at the forefront of development in the twin regions.

The road in the village, where Begum breathed her last, was blocked since 8 March near Koli Nala due to landslides following heavy rains earlier this month, the locals said. “While the PMGSY (Pradhan Mantri Gram Sadak Yojana) department failed to restore the road for traffic, a young woman died as a consequence to it,” one of the locals was quoted as saying by a local news gathering agency.

Executive Engineer of the PMGSY Sub-division- Uri, Peer Shah Jahan told the news gathering agency that landslides continue to occur in the area as the land is totally sodden due to rains.

“Work is ongoing and I am hopeful that the road will be opened in the next two to three days for traffic,” he said.

While it remains to be seen whether the road will open for traffic after two days or not, Begum’s family will spend another day without her as she remains buried in the nearby graveyard.

Kashmir is often abuzz with the reports of women losing their lives due to lack of healthcare facilities and infrastructure. Lack of basic health facilities even triggers protest demonstrations. According to a report that quoted officials of various district hospitals, the healthcare sector struggles to deal with such patients owing to dearth of human resources, especially gynecologists, anesthetists and nurses.

None of the district hospitals in Kashmir has a High Dependency Unit (HDU), not to mention an Intensive Care Unit (ICU), the report added. The HDU is an area in a hospital where patients can be cared for more intensely than in a normal ward, but not to the point of intensive care. So, it is also known as the intermediate care unit.ion health ministry, which lists a number of guidelines for obstetric HDU.

According to a report by the Jammu and Kashmir Health Department that quotes the National Sample Survey 2014 conducted by the federal ministry of statistics and program implementation, the private health sector provides 72 percent of the healthcare services in rural areas and about 79 percent in urban areas in the country. However, in Jammu and Kashmir, nearly 97 percent of the healthcare needs of the 14.3 million population of the state are met by public health institutions as the private sector has not developed in the state due to its geographical remoteness, disturbed security scenario and restrictive land laws.

The doctor-to-patient ratio in Jammu and Kashmir, the report says, is amongst the lowest in India. The upshot of poor health services in district hospitals of Kashmir, especially with reference to the health issues faced by the women, is that majority of the patients who need obstetric care and run even the slightest risk are referred to the region’s solitary tertiary care maternity hospital — Lal Ded Hospital — in Srinagar.

Explained | Who can vote in J-K assembly polls now?