If we have learned anything in all these years, it is only that peace is unable to settle in Kashmir forever, unless there is a strong political will and humanely addressing the people’s sentiments. 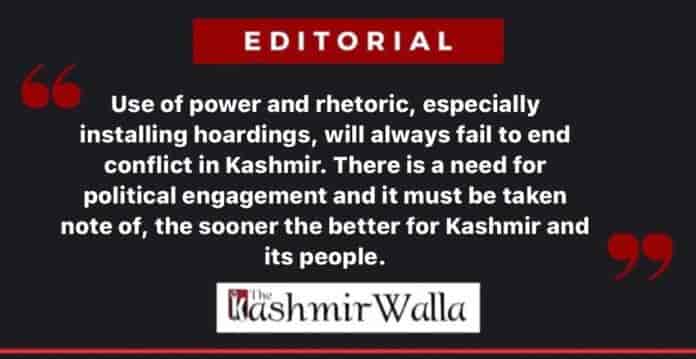 It has been decades since October 1947 when Pakistan’s raiders and Indian troops landed in Kashmir to lit a conflict that still remains unresolved. Today, Kashmir has changed from being an erstwhile state to a federal territory directly governed by New Delhi. In the past seven decades, Kashmir has witnessed many political developments and resistance movements but it has not brought the conflict at halt. In 2020, seventy-three years since that autumn, regional political parties are fighting for a space in the changed political landscape, while New Delhi is highlighting Pakistan’s role in the conflict. In Srinagar, even hoardings accusing Pakistan of attacking Kashmir have been put up, first time ever. A rally was taken on the prominent Gupkar Road — where most of the politicians have been residing for years, accusing Pakistan. All this is happening at a time when the same politicians, on the same road, are strengthening their campaign under the banner of the Gupkar Declaration — a vow to restore the special status of Jammu and Kashmir. The ruling Bharatiya Janata Party (BJP) has come hard at politicians of every ideology, which shows any opposition to New Delhi’s plans for Kashmir. Former chief minister Mehbooba Mufti, who was recently released from 14-month long detention, in strong words has shown opposition to the BJP, saying that the party is replacing the Constitution with its party manifesto. Since 1947, Kashmir has not only continued to suffer due to the political instability but also the promises made by politicians — of Kashmir, New Delhi, and Islamabad. If we have learned anything in all these years, it is only that peace is unable to settle in Kashmir forever, unless there is a strong political will and humanely addressing the people’s sentiments. Both New Delhi and Islamabad need to begin talking about issues as the continuous enmity has not yielded anything. Use of power and rhetoric, especially installing hoardings, will always fail to end conflict in Kashmir. There is a need for political engagement and it must be taken note of, the sooner the better for Kashmir and its people.

The editorial originally appeared in our 25-31 October 2020 print edition.