Does People’s Alliance has a roadmap? 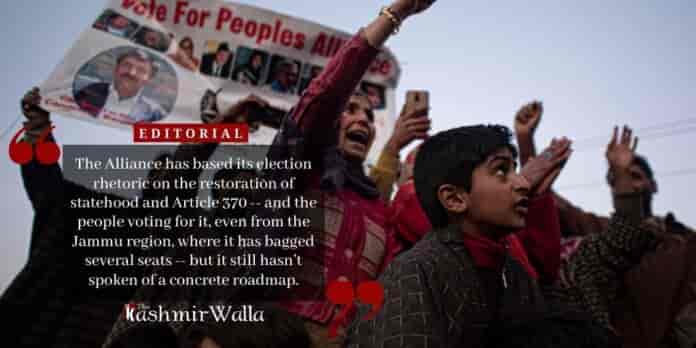 The People’s Alliance for Gupkar Declaration has emerged as a formidable force against the Bharatiya Janata Party-led Centre and it has done well in the recently concluded District Development Council elections but what is their roadmap ahead? The BJP as its opponent is not only armed with the vast state machinery but also a roadmap — it has a plan but more importantly a goal. Does the PAGD have a goal is a more pertinent question? The Alliance has based its election rhetoric on the restoration of statehood and Article 370 — and the people voting for it, even from the Jammu region, where it has bagged several seats — but it still hasn’t spoken of a concrete roadmap. At a time when the Alliance is being criticised by the BJP and the Apni Party for using the restoration as election rhetoric, the unionists, who have taken up the fight against the BJP, must rise up and clear the doubts over its sincerity.

Moreover, the Alliance’s major challenge lies in the Jammu region, where misconceptions have been carefully nurtured over the years and widened the gulf with Kashmir. The Kashmir-based leadership, too, must introspect and correct its own actions which have led to Jammu feeling discriminated against. The Alliance must take Jammu fully onboard if it intends to fight for Jammu and Kashmir. The Alliance must initiate an outreach programme. It has enough common ground already to initiate a dialogue and bridge the divide. A united Jammu and Kashmir will be a much more formidable force to withstand communally powered politics.