The Kashmir Walla
Support Us
MagazineFeatures 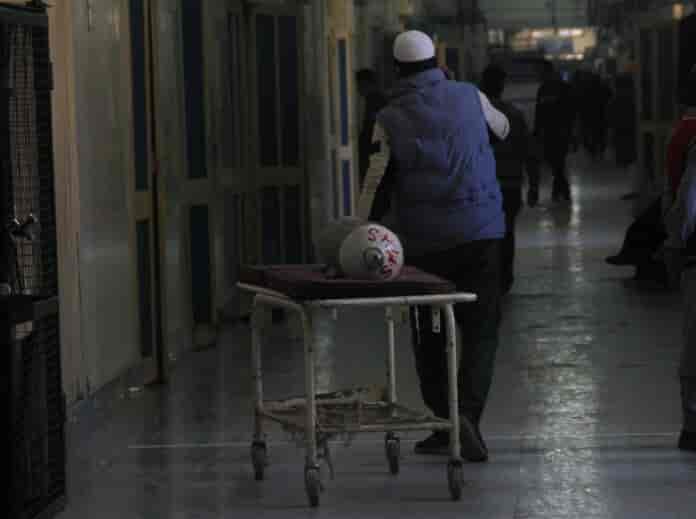 On the morning of 27 April, Mudasir Ahmad Najar was in the queue at the SMHS hospital to refill the oxygen cylinder that he purchased for his 43-year-old mother, Aisha Najar, who contracted the COVID-19 infection. He was anxious to return home as soon as he could.

Moments later, to his utter shock, the cylinder that he purchased for more than six thousand rupees from a local supplier was seized by the hospital staff. A video of the incident went viral in Kashmir, where the administration claims there is no dearth of oxygen supplies.

“I came here to get the cylinder refilled in an emergency but they seized my cylinder instead and said that it belonged to the hospital,” Mudasir, a resident of Chattabal area of Srinagar is heard saying in the video, his eyes welled up with tears.

As Mudasir struggled to get back his cylinder from an obstinate hospital employee, back at home his mother’s oxygen saturation level kept dipping. “We only had twenty percent oxygen left in the cylinder at home,” the 23-year-old sales executive with a private pharmaceutical company, told The Kashmir Walla. “But he was not ready to listen.”

It was only after the police’s intervention that Mudasir could take home his cylinder. “If this was the hospital’s oxygen cylinder then how did it reach the market?” Mudasir demanded. “The employees probably steal the cylinders from the hospital and sell them outside.”

What would have happened if the police hadn’t intervened on time? Mudasir begins to well up at the thought: his mother would have died alone in her room. “My entire family is positive, all of them have confined themselves to their separate rooms,” he said. “Nobody would have even known.”

Both of Mudasir’s parents, his two sisters, and the two toddlers of one of his sisters, have all tested positive for COVID-19. It is a trend of the second wave that doctors have warned about. Families poorly aware of the pandemic are left to fight on their own.

A few days before this incident, Mudasir had returned home to find his 24-year-old sister Fatimah Najar feeling short of breath, coughing, and down with a fever. He rushed her to the hospital where they got a confirmation of their fears.

Mudasir’s parents and another sister, along with her 17-month-old son and 35-day-old daughter, moved to a relative’s home while it was decided that he would himself stay and look after his infected sister. “But we were late,” he said.

Two days later, he received a call from his mother — who is hypertensive and diabetic, both fatal commodities to COVID-19 — during the night informing him that she also has similar symptoms. His mother soon began to writhe in pain and was taken to the SMHS hospital where she also tested positive for the infection. “I got her home and kept her in a separate room as well,” said Mudasir.

Just a few hours later, his 48-year-old father Mohammad Ashraf Najar and his 28-year-old sister Tahirah Najar and her two children had all tested positive for COVID-19.

His home now started to feel like a hospital to Mudassir with all rooms occupied by patients of COVID-19 and he himself the sole caregiver. “I immediately purchased all the necessary things including oxygen cylinders, oximeters, blood pressure apparatus, medicines, personal protection gears, masks, gloves, sanitizers, and food,” said Mudasir.

Wearing personal protective gear, Mudassir cooked and served food to his family along with constantly monitoring their oxygen levels and supervising their medicines intake. “My sister used to literally pull her hair due to extreme body ache. I would massage her legs,” he said. “How could I leave her alone?”

On the advice of a pediatrician, the toddlers were not separated from their mother. “They would receive the medicines through breastfeeding,” the doctor had told the Najar family.

Unsure and frustrated, Mudassir continued to act strong in front of the rest of his family and decided to not tell them about his mother’s deteriorating condition. “I used to cry when I would be alone. I only kept thinking what if she would die,” Mudasir said and broke down. “What could I have done alone?”

The second wave of the COVID-19 pandemic is now in a full ascent in Kashmir as well. The number of daily cases is steadily rising, breaking previous records every other day. On 1 May, J-K recorded 47 deaths and 3,832 fresh cases — the highest since the pandemic’s outbreak.

The surge in cases comes after tourists and travelers arrived unabated from other states that were already affected by the second wave and the emergence of the more fatal mutant strains of the COVID-19 virus. Health experts point out that not only is the virus spreading faster this time, but it is also affecting younger individuals as well.

After days of providing care to his entire family, Mudasir faced the inevitable. He had also started to show symptoms of the COVID-19 disease. After several days of intense body ache, sore throat, and fever, he knew what it was but decided to get himself tested anyway.

Much to his surprise, he tested negative. “I am sure that I was positive but I don’t know why the test came negative,” said Mudasir.

Despite the negative test, Mudasir’s health deteriorated and he could no longer walk properly due to exhaustion. On the advice of a doctor, he took the medicines prescribed for the treatment of COVID-19. “At one point I couldn’t do anything anymore,” he said.

Mudasir said that he wanted to close his eyes for some time but the worry and anxiety kept him awake. “After days of staying awake, I finally put alarms after the gap of twenty minutes on my phone. I would call them to ask if they needed anything and then I would fall asleep again,” he said. “The worst days of my life.”

Within a period of a few days, Mudasir has been financially drained since he had to keep everything available for his family. “I have been taking support from my company now. I did not take anything from the hospitals,” he said.

When one person in the family gets infected, there are much higher chances that the entire family might as well, said Mudasir, adding that there is a feeling of helplessness. “A person testing positive needs proper care. But when everyone at home is positive, how will you even do that?” he asked. “The second wave is dangerous.”

If the entire family feels the symptoms, they should not hide it and get tested immediately as they can spread the virus to other people coming to their home as well, said Mudasir. “They should start making arrangements for themselves,” he said. “Don’t panic and ask for help.”

‘Koshur’: Is literature dissipating, or are readers?

What’s your constituency?: All we know about J-K’s final delimitation plan