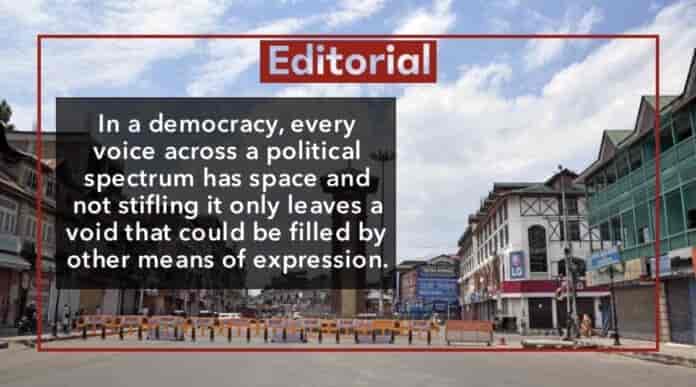 In Jammu and Kashmir, politics was at a halt until the District Development Council (DDC) election but the politicians still find themselves caught between to say or not to say. While unionist politics was revived to some extent during the DDC elections, they have largely remained silent on the path forward. Among them, the prime person has been Omar Abdullah, the former chief minister and National Conference (NC) Vice President, who talks on everything from Harrisa to snowfall on his Twitter handle, but on the political issues, he has often been taking steps cautiously. Others including his father Farooq Abdullah, or Sajad Lone of the People’s Conference, too have not been largely silent. Among the unionists, former chief minister Mehbooba Mufti has been speaking out in a different tone than her fellows. Even though the impact hasn’t been subdued much due to her former alliance with the Bharatiya Janata Party (BJP) and the killings under her watch in 2016. People have had very limited expectations from regional politicians on any matter – all because of their past ruling eras. On the other hand, anti-India politics has come to a grinding halt. All Parties Hurriyat Conference Chairman, Mirwaiz Umar Farooq who hasn’t been in public, physically or digitally, remains absent from the scene. The Hurriyat demands his release from the house detention but people find it hard to digest that the Hurriyat couldn’t find a way to speak on anything; rather chose to remain quiet. It serves the purpose of New Delhi, no doubts, but this silence hasn’t helped the revival of regional politics in Jammu and Kashmir either. In a democracy, every voice across a political spectrum has space, and not stifling it only leaves a void that could be filled by other means of expression.