Shashi Tharoor, Rajdeep Sardesai, and others booked for sedition 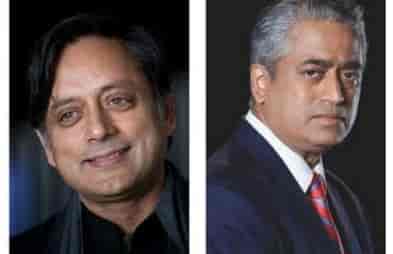 Srinagar: Police has booked a member of parliament and several senior journalists for sedition on Thursday.

An FIR was lodged at the Sector-20 police station in Noida based on a complaint by Arpit Mishra, for “tweeting and spreading fake news” pertaining to the death of a farmer during the tractor rally on 26 January 2021. The FIR also names Zafar Agha, the Group Editor-in-Chief of National Herald, and Ananth Nath, the Editor of Caravan.

The journalists and politicians have been booked under sections 153A [Promoting enmity between different groups on grounds of religion, race, place of birth, residence, language, etc., and doing acts prejudicial to maintenance of harmony], 153B [Imputations, assertions prejudicial to national-integration], 295A [Deliberate and malicious acts, intended to outrage religious feelings of any class by insulting its religion or religious beliefs], 298 [Uttering, words, etc., with deliberate intent to wound the religious feelings of any person], 504 [Intentional insult with intent to provoke breach of the peace], 506 [Criminal Intimidation], 505(2) [Statements conducing to public mischief], 124-A [Sedition], 34 [Acts done by several persons in furtherance of common intention] and 120-B [Punishment of criminal conspiracy] of the Indian Penal Code and section 66 of the Information Technology Act, 2000.