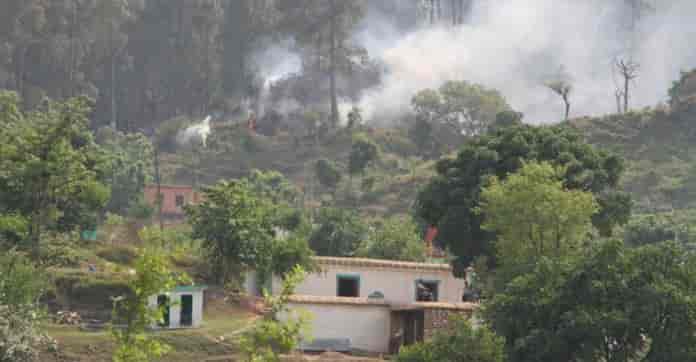 Srinagar: A government school and a residential house was completely damaged while some other structures received partial damages along Line of Control (LoC) in Rajouri village after Pakistan Army resorted to firing shells on the intervening night of Wednesday and Thursday.

The officials said that dozens of power poles also suffered damages in the shelling in over three villages of Rajouri’s Manjakote on Shab-e-Barat night.

The locals from the area said that during last night, three villages of Manjakote Tehsil including Rajdhani, Peryali, and Lambibari, came under intense shelling. “Heavy shelling lasted for over four hours from 9 PM to 01 AM,” said a local resident, adding that people spent sleepless night in entire border belt of Rajouri’s Manjakote Tehsil.

Meanwhile, teams from police and revenue department visited the shelling affected areas on Thursday morning. An official said that building of Government Middle School Lambibari, the house of a local resident, Mohammad Jameel, was damaged in shelling, whereas a few more structures also received partial damages in shelling.

“We have asked revenue authorities to conduct loss assessment and to submit a detailed report,” said officials in the Rajouri district administration. (KNO)

Previous article“Ensure our return or face us on roads”: Kashmiris stranded in Delhi warn govt
Next articleCOVID-19: Panic grips Bandipora after 12 test positive in a day, 36 overall