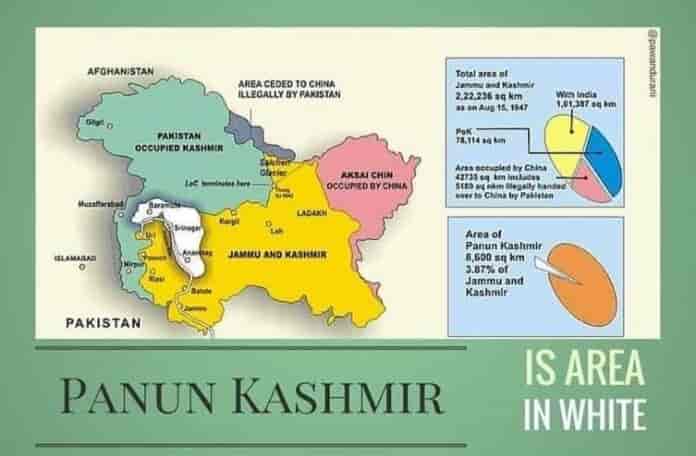 For the first time in three decades, the Rashtriya Swayamsevak Sangh (RSS) has shared its strategy for the return and rehabilitation of the Kashmir Pandits who were forcibly displaced from Kashmir beginning in the 1990s: sacrifice and surrender.

Contours of the RSS’s roadmap were shared by the organisation’s general secretary Hosable Dattatreya on 14 April, during a three-day festival to celebrate Navreh, new year as celebrated by the Kashmiri Pandits.

In the nearly hour-long address, Dattatreya implored Pandits and Indian Hindus to come together to take a pledge to “resettle our kin and friends and celebrate with fervour the next Navreh in Kashmir”, and taking inspiration from the Zionist occupation of Palestine to resuscitate and assert Kashmir’s Hindu past.

The de-operationalisation of the Article 370 and removal of Article 35A on 5 August 2019, Dattatreya said, had established that “Kashmir is India’s integral part” but that it was only a “milestone” in the larger scheme of things as “the work was still not completed.”

But the speech led to murmurs of resentment which eventually spilled into public discourse more than a month later, after militants killed a Kashmiri Pandit politician with the Bharatiya Janata Party, Rakesh Pandit, in south Kashmir on 2 June.

Jammu-based leaders publicly criticized policies of Prime Minister Narendra Modi, the RSS and its chief Mohan Bhagwat during a virtual condolence meeting held a day after the killing — they argued that Kashmiri Pandits were pawns used against Kashmiri Muslims.

Bhagwat was initially scheduled to speak at the event but couldn’t as he had contracted Covid-19. Bhagwat has been critical of the Modi government’s handling of the pandemic and has also dropped hints of reconciliation with India’s Muslims.

The Kashmiri Pandit leaders criticised the RSS for choosing to overlook their demands, for a separate union territory among other things, to “surrender” before and appease Muslims instead of initiating a military campaign.

In his nearly hour-long address, Dattatreya emphasised the need for “sacrifice” and “surrender” to achieve larger goals — here, the return of the Kashmiri Pandits to the Valley from which most have migrated.

To emphasise and illustrate the RSS’s point, Dattatreya spoke of Shree Bhat, a fifteenth-century physician and a Kashmiri Pandit who secured the return and dignity of his community instead of riches in return for successfully treating the Muslim king Zainul Abideen, known as Budshah or the great king for his benevolent rule.

Presenting it as an example of winning over the enemy through actions and words, Dattatreya said that “the foreign invader got a big life lesson from this… He [Shree Bhat] didn’t give a cure just for his [Zainul Abideen] sickness but also the sickness of his mind” to make possible the return of Kashmiri Pandits who had fled persecution.

Dattatreya also drew a parallel between the Kashmiri Pandits and Zionist Jews and cited Zionism as an “illustrious example” to emulate. “Each generation [of Jews scattered across the world] decided that they would return to Israel. Each generation was given a pledge and commitment and they kept fighting,” he said, and “obtained their independent nation once again.”

“It is the power of a people’s collective resolve. It is an example from history to take inspiration from,” Dattatreya said. He further added: “To make India’s paradise a paradise once again, attempts need to be made through all means — cultural, societal, political. For this, there is a need to protect peace, cooperation, and goodwill. We need to create a discourse in society and cooperate with the government.”

The event was organised by Jammu-based Sanjeevani Sharda Kendra, an RSS affiliate organisation and was attended by members of the Kashmiri Pandit community who pledged themselves to, among other ideals, “the cause of restoration of peace, tranquillity and foster bonds of brotherhood” and celebrate the next Navreh in Kashmir.

The version of the story of Shree Bhat and Budshah recounted by Dattatreya, a tale of surrender before the powers of the time, cited by Dattatreya as one of the inspirations for their future course of action, the Kashmiri Pandit leaders at condolence meeting interpreted it as directions to surrender before Kashmiri Muslims whom they accuse of being perpetrators of a “genocide”.

This strategy, and subsequent references made to ensuring peace and goodwill along with the complete overlooking of the demand for a separate Union Territory for the Kashmir Pandits called Panun Kashmir as the only solution to their return, led to an outburst of anger.

Shailendra Aima, a Kashmiri Pandit with generational ties to the RSS, was aghast at the outfit’s overtures to reconciliation with the Muslims. “The Indian establishment is incapacitated,” he had stated during the condolence meeting. “That is why people like Rakesh Pandita are prepared just to attempt to get another Budshah to emerge in their jihadi society, upon whose mercy the society will give Kashmiri Hindu space to live. This is the defeated mentality.”

“What is behind this thought,” explained Ajay Churungoo, who heads an organisation called Panun Kashmir that advocates the carving out of a separate homeland of the same name for Kashmiri Pandits, “They told Kashmir Hindu that you have to live and befriend Kashmir Muslim and bring him to favour the nation, not by fighting and contest… It will become an important interface. Simultaneously, tomorrow you can be our eyes and ears, our mukhbirs (informers). That is your purpose.”

A section of the displaced Kashmiri Pandits, in a resolution passed on 28 December 1991 called “Margdarshan”, sought resettlement in a separate Union Territory for Kashmiri Pandits “comprising the regions of the Valley to the East and North of river Jehlum” and the application of the Constitution of India, which was at that time not applicable to Jammu and Kashmir but is inforce after 5 August 2019.

Since the rise of Narendra Modi, the Sangh’s decades old campaigns for the revocation of J-K’s limited-autonomy and the construction of the Ram Mandir over the Babri Masjid have come to fruition. But the launch of a campaign for the rehabilitation of Kashmiri Pandits is marred by differences of opinion within the community itself.

A senior office bearer of the RSS in J-K declined to comment on the resentment expressed by the organisation’s allies among the Kashmiri Pandits and dismissed it as “the resentment of a few”. The office bearer asserted that the RSS’s viewpoints were widely appreciated.

Prez election to be announced today