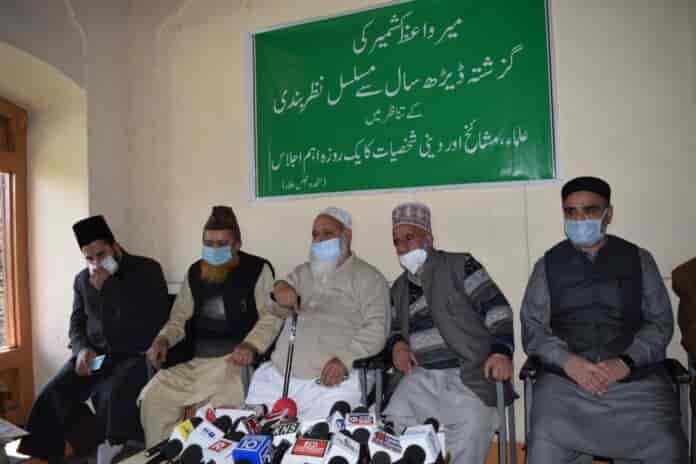 The clerics held a joint press conference regarding the continued house arrest of Mirwaiz-e-Kashmir Moulvi Muhammad Umar Farooq for the last 20 months.

While addressing the media, the participants said that the meeting was called to once again reiterate upon the authorities to release Mirwaiz e Kashmir immediately , especially as the holy month of Ramadan was about to commence.

The leaders expressed dismay that despite passing of more than 20 months and repeated appeals , the arbitrary house detention of Mirwaiz continued, “which is a matter of grave concern for the religious fraternity of the valley and creates unease and anguish among people.”

The participants who represented all the religious sects of  the Muslims of Jammu and Kashmir, said that they appeal to the government to release Jammu and Kashmir’s chief religious cleric Mirwaiz-e-Kashmir Dr Moulvi Muhammad Umar Farooq .

They said that the pulpit of the central  Jama Masjid, Srinagar – had fallen silent and wore a deserted look , which otherwise reverberated with Qaal Allah Wa Qaala Rasool (SAW), since the Mirwaiz’s  arrest.

This they said is deeply disturbing to the people and religious fraternity of the valley who crave for the presence of their beloved religious leader in the historic Jama Masjid, they added. It is also direct state intrusion in the religious rights and affairs of the Muslims of J-K.

The meeting also appealed to the authorities that in view of Ramadan, all political prisoners and youth in jails across J-K and outside should be released on humanitarian grounds.

The meeting said that all Ulema, Aimams and Khateebs of Jammu and Kashmir will continue to demand for the release of the Mirwaiz-e-Kashmir before the holy month of Ramadhan, and in their Friday sermons tomorrow will raise the issue forcefully

Agha Syed Hassan  of Anjuman sharai shian could not attend as he was denied permission by the authorities to participate. His son Agha Mujtaba instead represented Anjuman Sharie shian