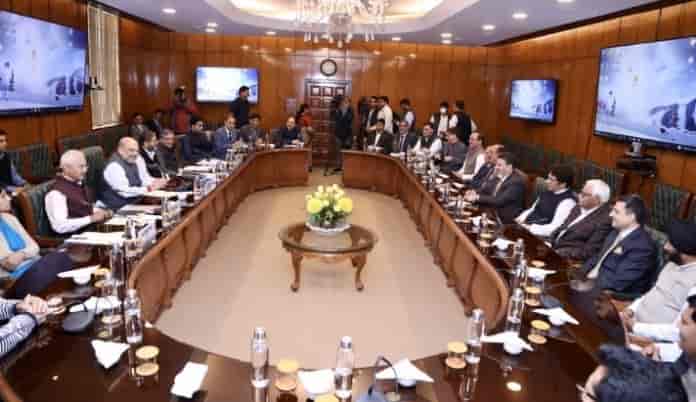 A statement issued reads, the meeting which lasted for over two hours was held in a very congenial atmosphere. The delegation put forth important issues pertaining to socio-economic and political aspiration of people of Jammu and Kashmir and demanded immediate steps by the government of India in this regard.

Calling for immediate confidence building measures for making a conducive atmosphere in J-K, the delegation emphasized on fulfillment of the promises made by the Union Home Minister on floor of the Parliament on 6 August, 2019.

The Home Minister assured the delegation that all possible steps would be taken by the government of India to empower people of Jammu and Kashmir, both economically and politically as well. He expressed confidence that visible changes will be seen on the ground in the next three to four months. Following issues were put forth by the delegation.

The delegation apprised the home minster about apprehensions with regard to demographic transformation in Jammu and Kashmir which needs to be dispelled by the country’s top leadership especially the Hon’ble Prime Minister, himself.

The delegation observed that the gulf between people of Kashmir and people in Jammu need to be reduced with a promise and purposeful assurance by the country’s top leadership that there shall be no discrimination in development and opportunities on the basis of region or religion. The delegation demanded that the majority community of J-K should be reassured that no steps would be taken that can effect a change in demography of the region.

He fully assured the delegation that there would be no changes made in demography of the region and urged the people not to lend credence to such misinformation campaigns. He said the misgivings about disempowering the majority community in J-K are baseless and should not be paid any heed.

He, however, agreed to the instant demand placed by the delegation and assured that till their release, the political activists who are under preventive detention and are lodged outside J-K jails shall be allowed to talk to their families on phone which would be facilitated by the authorities within a week.

Domicile Rights on Land and Jobs

During the course of meeting, the Home Minster assured the delegation that Jammu and Kashmir will have a better domicile policy than other states in the country very soon and steps are being taken by the government of India in that direction.

The home minster assured the delegation that the commitment with regard to the restoration of statehood would be fulfilled after the delimitation exercise is conducted in Jammu and Kashmir.

The Home Minister assured that the process of delimitation will be carried out purely based on merit and there would be no scope for any changes to be made in boundaries and description of the extent of parliamentary constituencies without any rationalization.

The union home minister assured the delegation that the government of India would ensure J-K Bank functions as an autonomous financial institution with negligible political or bureaucratic interference. He assured that all other issues related to the Bank like corporate lending, settlement process, advances to business community, recruitment processes, delayed results, cancellation of selection lists etc would be looked into on top priority.

The home minister assured the delegation that Jammu and Kashmir said that a reasonable Economic Development Policy will be drafted soon after widespread consultation that will cover all sectors including tourism, agriculture, horticulture, transport, handcrafts, hoteliers, houseboat owners, shopkeeprs and industrial sector.

Shah told the delegation that a very attractive Industrial Policy will be announced soon for rapid economic development and a Land Bank has already been created. He said, for the last 70 years, J-K attracted Rs 13,000 Crore and expressed hope that by 2024 three times more investment will come in the region as there is huge potential for the same and investors are also willing to come forward. This will also solve the problem of unemployment in the region, he added.

The home minster said that youth is a very important asset of any nation and he would personally ensure that a comprehensive policy is framed for J-K youth to provide them opportunities and uplift their morale.

Shah said that the government of India is already working on dignified return of return Kashmiri Pandits to their homes and he would need support of all the stake holders to make it possible.

The home minister promised that all necessary steps would be taken in that direction.

The home minster assured that development of Jammu-Srinagar National Highway which has been a source of perpetual distress for the people of the region will be taken up on urgent basis.

He said that the cap on airfare will be also taken up with the concerned ministry and similarly construction of tunnels to connect different regions of Jammu and Kashmir would be taken up on priority.

Shah assured that all union laws and laws governing Union territory that are beneficial to the public would be enforced in Jammu and Kashmir without any selective approach. He assured that he will look into the non applicability of the Scheduled Tribes and Other Traditional Forest Dwellers (Recognition of Forest Rights) Act 2006 in Jammu and Kashmir and address the issue accordingly. (KNS)

Previous articleAll restrictions in Kashmir should be lifted to tackle with coronavirus threat: Pakistan
Next articleWhere to find the Best Rated Dating Internet site For Men In search of Women