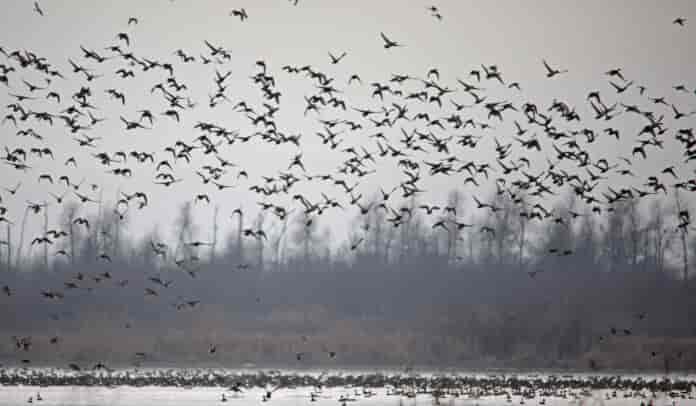 Srinagar: At least four lakh migratory birds have arrived in the Valley to keep their date with the region.

This year’s bird migration has, however, attracted the attention of bird lovers and wetland officials of Kashmir given the fact some 20 rare bird species have been found among the guests who have visited the region for the first time.

Every year, Kashmir hosts lakhs of birds who come all the way from Central Asian flyway zones that include Siberia, North China and North Europe. These birds stay in Kashmir till March.

“This year, we have four lakh migratory birds in our wetlands across Kashmir. The main highly of this year’s bird migration is that we have received some rare bird species who have been spotted for the very first time in Kashmir wetlands,” a senior official of the wild-life department, told news agency—Kashmir News Observer (KNO). “These birds know their route very well as they are always led by a pilot bird who has age and experience of travelling through long routes.”

Wild life warden for Wetland division Kashmir , Ifshan Dewan told KNO that at Hokersar there are over a lakh migratory birds present. “This time there are 10 to 20 rare bird species that have arrived. Bird lovers and bird watchers have identified the new guests along with our staff and we are analysing their nature and habitat etc,” she said.

She said that a bird watcher Riyan Sofi is working hard along with the wetland staff to identify new guests in Kashmir wetlands. On poaching, she said that special teams have been constituted to prevent poaching—(KNO)

Lieutenant Governor Manoj Sinha Friday said that the administration is going to conduct the re-exam of Jammu and Kashmir...
Kashmir