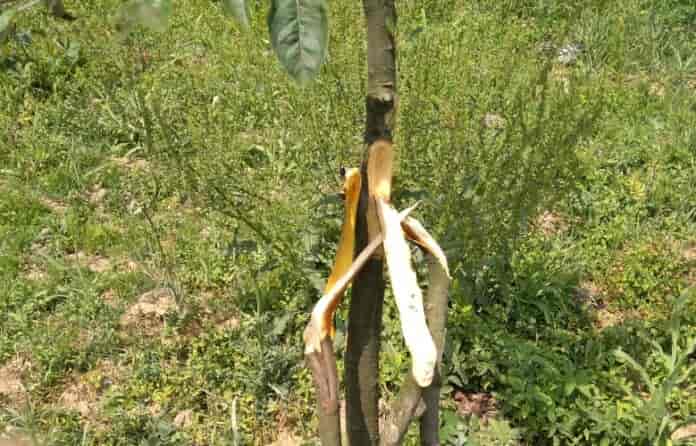 Srinagar: On the morning of 5 June 2020, Abdul Rahim Bhat was informed by his neighbours that trees in his orchard had been chopped down amid the lockdown owing to the coronavirus pandemic. Mr. Bhat immediately rushed to his orchard in the Bijbehara area of south Kashmir’s Anantnag district to assess the damages.

Just days before the trees were chopped down, some apple trees in his orchard in the Mehand village were damaged but this time, a relative of Mr. Bhat said, several trees had been chopped down entirely. “Around 100 trees were chopped down in my orchard,” said the relative, adding that he the family had initially downplayed the incident. “On the night of 1 June, branches of some trees were broken by some. I thought it was mischief.”

Panic spread in the village after some other apple growers reported similar chopping of trees from their orchards, said the relative, adding that trees were chopped down on two nights – on 2 and 4 June – after the initial damages done on 1 June. Mr. Bhat’s relative said that he had approached the police to register a complaint.

Orchardists in Mehand grow apples of the Kullu Delicious and Royal Delicious varieties, considered among the better varieties of apples. “These trees will no more bear fruits,” lamented Abdul Rashid Rather, another apple grower from Mehand. “All my investment [in the orchard] is wasted now as it will take years for new trees to grow [in place of the chopped ones].”

Mr. Rather said that besides the trees requiring anywhere between 3 to 7 years to mature, there is a continuous requirement large amounts of expensive fertilizer and pesticides for good produce. “We will be able to buy new [fertilizers and pesticides for the next season] only after apples [from the current season] are sold at appropriate prices,” he said.

The Deputy Superintendent of Police, Shammi Kumar, said that the police was investigating how the trees were chopped. “We are investigating how and why the trees were chopped,” Mr. Kumar told The Kashmir Walla. “Till now, we do not doubt anyone in particular but we have decided to patrol the entire area of Mehand from tonight to prevent any further damage and we have even established 3-4 check points.”

Still, a statement circulated by the district police blamed the incident on a land dispute between two families. However, the head of the local Auqaf committee in Mehand, Abdul Rashid speaking to a local newswire Kashmir News Trust dismissed the claim pointing out that at least six orchard owning families had been targeted.

Kashmir News Trust reported that more than 200 hybrid apple trees had been chopped down in Mehand. “Family dispute always involves two units but here apple trees of six families have been cut down,” he told Kashmir News Trust. “The villagers now appeal to DC Anantnag to order an inquiry so that miscreants could be identified.”

Villagers in Mehand are, however, still anxious. “We are completely dependent on orchards to earn a living and now the trees have been chopped down,” said Muzammil Rasheed, another apple grower from Mehand. Mr. Rasheed added that villagers had considered maintain a vigil themselves if it wasn’t the fear of running into patrolling government forces. “We are completely helpless because we cannot take the risk of going to the orchards during the night.”