Indo-Pak friendship without Kashmir is a mistake 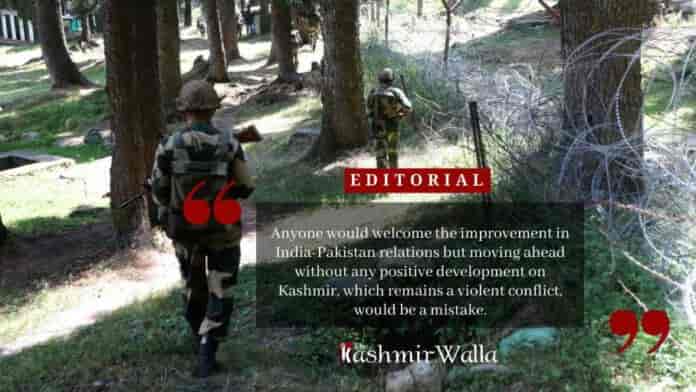 After years of confrontation at multiple levels, India and Pakistan are again trying to mend the broken relationship through several measures. Since the two nuclear power countries decided to uphold the ceasefire along the Line of Control – the de facto border between them dividing Jammu and Kashmir, people have found new hope. In the aftermath of the 14 February 2019 suicide attack on the paramilitary forces in Kashmir, Indo-Pak relations reached a point of no return. It seemed that the two countries will never be able to get back on the table of dialogue. This perception intensified after the August 2019 constitutional changes to Jammu and Kashmir by Prime Minister Narendra Modi led Bharatiya Janata Party (BJP) government. From the reactions of Pakistan Prime Minister Imran Khan on the matter, and especially about Modi, it didn’t seem he can ever mend his relationship. Fast forward to almost two years ahead, today, South Asia seems to have shifted to a new chapter. As per multiple reports, India and Pakistan are aiming to come together on a dialogue table, to discuss matters of conflict, perhaps including Kashmir. The Pakistan army chief even went ahead to say that they should bury the past and move ahead, however, stressing that the Kashmir issue remains at the heart of it all. Even though it is evident that the South Asian rivals are leaving behind a trail of destruction caused to each other in the recent conflict but the bottleneck remains Kashmir. The region has been dealing with the post-August 2019 developments, including lack of political representation of people, and the absence of any middle ground to discuss contentious issues. This time when the two countries set to meet, they may not even have a Kashmiri on the table. Anyone would welcome the improvement in India-Pakistan relations but moving ahead without any positive development on Kashmir, which remains a violent conflict, would be a mistake.