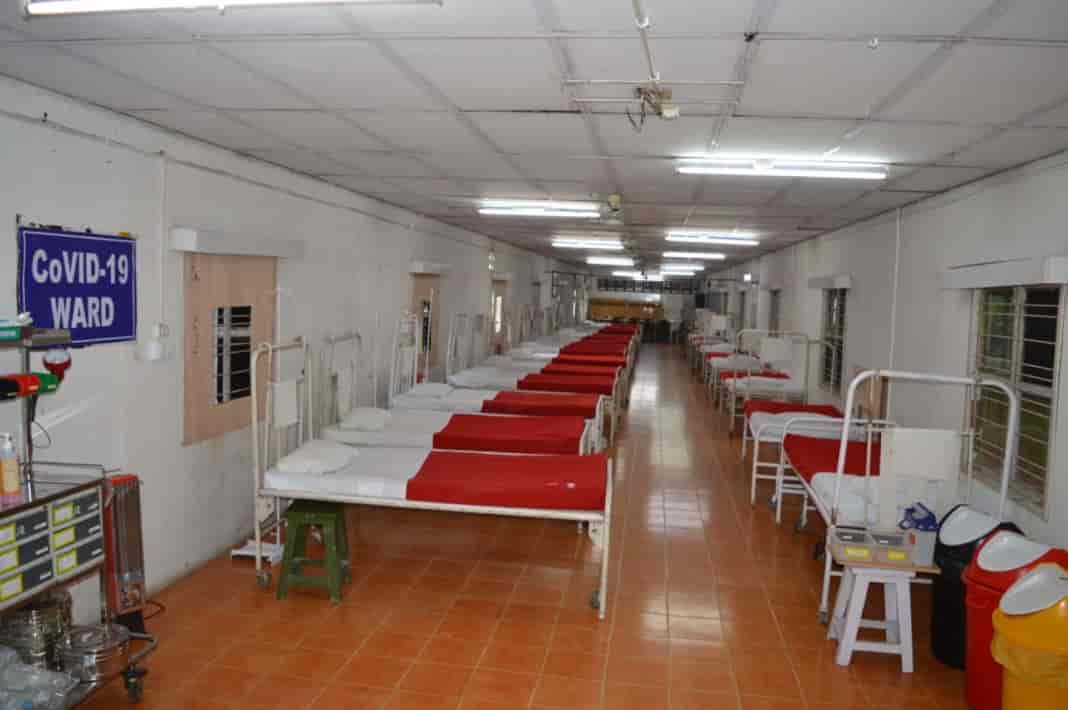 NOTE: Since this story was reported one person was found positive for Covid-19 in Srinagar district of Kashmir valley on Thursday. More details here.

Without wearing a mask, 80-year old Mohammad Jaffar Bhat, is coughing, complaining of mild-suffocation as he sits on a bench outside the office of Chief Medical Officer (CMO) in central Kashmir’s Budgam district. His nephew, Aqib Haider, who isn’t wearing a mask either, is unable to find a doctor in the vicinity — or anyone else to direct him around.

About half an hour ago, Mr. Haider was purchasing an Out-patient Department (OPD) card for his uncle’s health evaluation in the district hospital. When the doctor on duty came to know of Mr. Bhat’s recent travel history to Iran — he directed him to the CMO, “advising to get tested for coronavirus soon.”

After undertaking a pilgrimage with forty others, Mr. Bhat landed at Sheikh ul-Alam International Airport in Srinagar on the morning of 26 February. “I was not screened at this airport [for the novel coronavirus, COVID-19],” he says, adding that though he was screened in a jam-packed queue at Indira Gandhi International Airport, New Delhi. “From there, I straight went to my home and met my family members.”

By that time, Iran had already been another flashpoint of COVID-19; ninety-five cases were tested positive, including the Deputy Health Minister Iraj Harirchi, and sixteen of them had died; her neighbours — Saudi Arabia, Kuwait, Iraq and Turkey among others — had closed their borders.

“After three days at home, he [Mr. Bhat] fell ill and complaint of dry-cough and body pain,” says Mr. Haider. After hearing from multiple sources, including telecom advisory on the spread of COVID-19, Mr. Haider decided to reach out to the hospital.

“We want to see if he has the virus as well,” says Mr. Haider, checking if any doctor is around. “It is for ourselves – we want to be sure on our part.”

Believed to have started from Wuhan’s Haunan seafood market in China’s Hubei province, this virus has spread across 124 countries. More than 1,25,000 have been infected and at least 5,000 died worldwide.

On 11 March, about three months after the outbreak was reported in China, the World Health Organization (WHO), in what was be foreseen, officially called it a pandemic; a situation when any new disease spreads around the world beyond expectations and people have no immunity against it.

In India, there are at least seventy-three people tested positive — with no deaths directly linked to the virus. However, a couple of individuals, including in Leh, Ladakh and Kalaburagi, Karnataka, have died due to COVID-19 like symptoms.

The situation in Kashmir

“We have installed screening checkpoints on all modes of transport,” Dr. Qadri told over a phone-call interview on 11 March. “By road, in Lower Munda [district Anantnag, south Kashmir], we have screened 2,757 passengers.” He added that seven were quarantined in Sher-e-Kashmir Institute of Medical Sciences (SKIMS).

Though, the claims of screening at the airport is contestable, Dr. Qadri says it started with a desk on 1 Feb and later upgraded into five; however, Mr. Bhat and his group that landed on 26 February and several another passengers, who arrived before the given date, denied going under any screening process at all.

Any passenger with the specific travel history, who has not been screened, is a potential danger to the society. Anybody who has been in contact with an infected person must also be screened – even if it is in hundreds – regardless of the symptoms.

In months of January and February, over seventy foreign tourists, with a history of travel to China, Japan, and South Korea, arrived in the Valley without any screening, The Hindu quoted a senior official. About 30 per cent of them were of Chinese origin. The number also excludes students and traders who travelled to these countries and returned in those two months.

It raises an alarm for a possible existence of virus already in the community. “Any passenger with the specific travel history, who has not been screened, is a potential danger to the society.” acknowledges Dr. N.A. Bhat, CMO Budgam. “Anybody who has been in contact with an infected person must also be screened – even if it is in hundreds – regardless of the symptoms.”

But lately, the administration has been on its toes. On 11 March, Director National Health Mission, Bhupinder Kumar, ordered closure of all educational insitutes in J-K. He also urged people to avoid unnecessary travel and minimise use of public transport.

In Budgam district, for instance, after the directions from District Divisional Commissioner, Dr. Bhat’s team established nine isolation wards with about seventy-eight beds to accommodate the arriving students and pilgrims, majorly, flying in from affected countries.

Here, if an infected person comes amid crowd and stand in line of OPD, there will be a disaster– he can infect other people. The WHO guidelines also advise the same: self-quarantine.

One isolation centre at the District Hospital Budgam was accessed by The Kashmir Walla. Newly constructed residential quarters for doctors located merely a few metres beyond the premises of the hospital, was said to be in an almost final stage of  preparation to function as isolation wards for four inmates: twin beds in two rooms. There was a conspicuous absence of the provision for the recommended high-temperature as of by 11 March.

However, the District Hospital of Budgam doesn’t expect any patient to come and knock on their doors – says Dr. Mohammad Rafiq, Medical Superintendent at the hospital. “Here, if an infected person comes amid crowd and stand in line of OPD, there will be a disaster– he can infect other people,” he says, adding that the WHO guidelines also advise the same: self-quarantine.

That is why the hospital rebutted Mr. Bhat as well. But nobody is telling him, and his nephew, Mr. Haider, where to go for a test.

Another matter of concern is that there is only one testing lab in Kashmir: in Sher-e-Kashmir Institute of Medical Sciences (SKIMS). Another at Government Medical College, Srinagar, is expected to become operational soon.

But SKIMS has “limited stock and supplies of diagnostic kits, items etc,” says the Government of J-K SKIMS, Soura, issued in-house circular, undersigned by Head of Department, Microbiology, Dr. Bashir Ahmad Fonda. It adds: “In this regard, Head of Departments/Faculty Members are informed that only those cases shall be sent for diagnostic testing… who are either admitted in wards or received in Emergency Medicine falling in ‘C-category’…”

In Jammu, the doctors are calling out to the government and administration for lack of masks and sanitisers. Balvinder Singh, president of the Doctors Association Jammu termed the government’s response to the disease as “pathetic”. He alleged that “Supplies are not adequate, and many doctors are using surgical masks instead of N-95 masks.”

Mr. Haider, the attendant with Mr. Bhat, is falling sick, too; he complaints of chest-pain and weakness, as he coughs. He thinks that it would be just seasonal flu. “The [District Hospital Budgam] is behaving irresponsibly for not attending to us. They don’t care about us,” he says. “Now, I’m afraid that I might also catch the virus [from Mr. Bhat].”

The hospital administration and authorities reiterated in number of interviews The Kashmir Walla conducted that there is no need panic as no one has been tested positive in Kashmir. And that the authorities, including themselves, are majorly treating it like any other flu outbreak.

Dr. Nisar Ul Hassan, president of Doctors Association of Kashmir and regional in-charge of 2009 H1N1 pandemic, which claimed lives of about 5,75,400 lives across the globe, says – “it is not.”

“This outbreak is not easy as it’s a new virus,” he says. “People fell ill to pneumonia and died. There is no vaccine… and the connectivity is so fast that it can spread quickly.”

To halt that, other than intense screening and follow-ups, he suggests that proper training of doctors beforehand is essential. “I don’t think there has been any actual training,” he says. “And it is not wise to train people after the pandemic.”

But he doesn’t want to get too negative and suggests people to stay composed. “We have doctors with expertise – they just need to refresh internally.”

In that case, what is there to learn from foreign countries?

When Italy detected three cases in the late January and isolated them in Rome, the Guardian wrote that the sense of confidence was palpable. However, the picture became clear in February that the virus had been circulating unnoticed in northern Italy via other local chains of infection, in all probability since mid-January. Hence, the numbers grew exponentially: Italy had only sixty-two confirmed cases of COVID-19 by 22 February. It multiplied to 888 by 29 February and further to 4,636 by 6 March.

The latest report from Italy states that the death toll spiked dramatically overnight by 31 per cent – reaching a toll of more than 800.

Similar story unrolled in United States’ Seattle when the federal government missed a series of chances to ensure more widespread testing came during the early days of the outbreak, when containment would have been easier, wrote The New York Times. Currently, there are more than 1,000 infected people and at least thirty-seven dead in US.

Although, there is no positive case in the valley, says Dr. Hassan, we should not be complacent as the threat is real. “It would be a fatal mistake if we assume that the virus will not hit us,” he adds.

Mr. Bhat asks Mr. Haider to look for a doctor once again. It has been more than an hour and half and he still couldn’t find anyone to guide him; the CMO has left for a meeting. Tired of waiting, Mr. Haider asks, “What now?”

Yashraj Sharma is an Assistant Editor and Kavya Dubey is a Reporting Fellow at The Kashmir Walla.