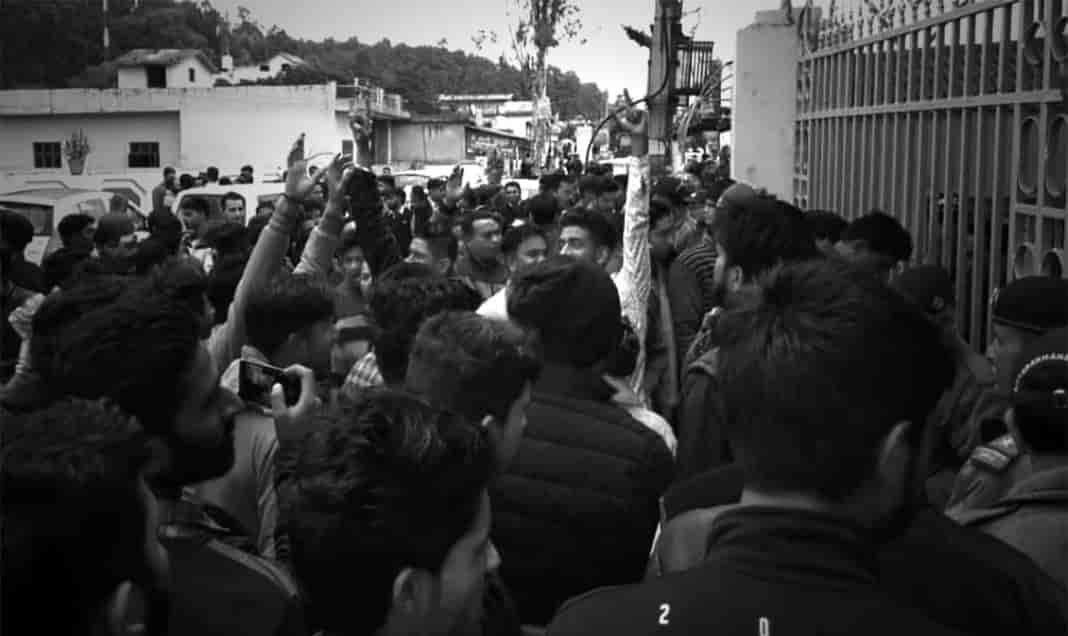 “I’m proud to be a Kashmiri – no doubt – but at times, it is frustrating,” says Uzair Zargar, sitting inside a friend’s accommodation in Jamia Nagar, Delhi. “I’m stuck. Back at home, there is no internet, and here I’m even afraid to go on a stroll.”

Last year, on 14 February, a 19-year-old Kashmiri militant, affiliated with Jaish-e-Mohammad, rammed an explosive-laden Maruti Eeco into a Central Reserve Police Force (CRPF) convoy of seventy-eight vehicles in Lethpora, Pulwama. The attack killed at least forty CRPF personnel; India’s reprisal almost brought her on the brink of a war with Pakistan.

Far away, as seen from mainland India, perhaps the line between a Kashmiri militant and a Kashmiri blurred. The social media space, especially Facebook, was simmering in anti-Kashmiri rage, captured by trend #IndiaWantsRevenge.

Dehradun, Uttarakhand, had always felt safe to Mr. Zargar, though. He was among hundreds of other Kashmiri students enrolled in private universities in different courses – mostly professional.

After February 2019 attack, Mr. Zargar was among thousands of students studying outside Kashmir Valley, who were forced to flee back home; leaving behind aspirations, dreams, and their world of their own. Since then, his life has turned upside down.

His five-year down-the-line plan has flipped and the 24-year-old native of Trehgam village of Kupwara, north Kashmir, is anxious and depressed about his future.

What about future? The family had started quizzing when he returned home. Meanwhile, Mr. Zargar regretted his decision of going to Dehradun in the first place.  In that given situation, how he could tell his family that he had applied for a P.hD in Dehradun. “I withdrew my application,” he says, “because Kashmir is uncertain. If something happens tomorrow, I don’t want to go through the same thing again.” He would sit for the next couple of months – rewinding the memories. “They are fresh; it isn’t easy to forget,” he says.

“Education is the future… there is whole world outside Kashmir”

Mr. Zargar completed his studies from his native village and post eighth standard he lived between Kupwara and Srinagar. Eldest son to a supervisor in Public Health Engineering Department, Mr. Zargar always dreamt of just a prefix – Dr.

After completing high-school with Science, he wanted to opt for a professional course. In absence of institutions offering professional courses and lack of seats in government-run universities, Mr. Zargar chose to pursue his education outside the Valley.

After a round of local counselling, he ended up at Alpine Group of Institutes in Dehradun. His parents were reluctant to send him away. “Education is the future,” he had explained to his parents. “Here, I have no exposure; there is a whole world outside Kashmir.”

In summer 2013, Mr. Zargar enrolled in Bachelor of Science in Forestry, a four-year course.

But, inside the air-conditioned classrooms, Mr. Zargar was an outcast – “because I was a Kashmiri.” His classmates looked at him differently; talked behind his back; called him names. “I spent my first year only with fellow Kashmiris,” he says, “No one else would talk to any of us.”

In second year, a girl today, he calls her a friend – said, “We were afraid of you. You looked like a terrorist, but you are different.” For the semesters to come, either Mr. Zargar would be giving history lessons about J-K’s annexation to Union of India or walking past the xenophobic slurs.

“What have I done to them?” he would often wonder. “Why does it feel like a foreign country?”

By June 2017, he was upbeat as his course had ended and he could go back to Kashmir. He took a shot at Sher-e-Kashmir University of Agricultural Science and Technology (SKUAST) for Masters of Science in Forestry but didn’t make it to the final list.

He didn’t want to go outside Kashmir; he couldn’t find a seat in Jammu either; moreover, he remembered being alienated in Dehradun.

By the end of summer 2017, Mr. Zargar was back in Dehradun. From a new rented two-BHK flat on the first floor, he, and three other Kashmiri roommates, could oversee the market at Shimla Bypass. A kilometre away was his new university – HNB Garhwal University.

The subsequent two years passed quite well for him. No scuffles. Less slurs.

Then, February 2019 came. He was in final semester and was done with written examinations. While waiting for the dates of due practical examinations, he read an alert about Pulwama attack on Facebook.

Soon, as Mr. Zargar recalls, his Facebook feed was full of posts. The likes, shares, and comments were like wildfire; an abuse and its follow-up; “within no time, it was an online war.” “People started saying that there are a lot of Kashmiris in Dehradun and they should get rid of us,” Mr. Zargar recalls comments from his feed. “I started feeling unsafe even in my room.”

In the evening, one of his friends overheard a rally. “It was a mob,” Mr. Zargar recalls, “I could hear them shouting – ‘Desh ke gaddaaro ko, goli maro saalo ko!’ (Shoot the traitors of the country).”

Simultaneously, there were more groups organising on social media, especially Facebook, asking for unity against Kashmiris. [The Kashmir Walla had exposed two such groups in February 2019 and reported about them].

I just wanted an out; I wanted to run away. People I knew and studied with were calling me a traitor – but, for what? I didn’t post anything; I didn’t blast the bomb; I wasn’t a militant.

Mr. Zargar and his roommates had run out of food; but, they couldn’t dare to move outside. “Our landlord, a nice man, brought some snacks for us,” he says. But, as the night took over, the fear intensified. “I was sure that they would kill us tonight,” he recalls the feeling. “But we passed the night assuring each other and talking to our panicked families.”

Next morning, they again woke up to a mob at their door – demanding them to leave the place at soonest. Rallies announced warnings to landlords hosting Kashmiris. Accommodations were barged in. Deadlines and threats were issued.

By the eve of 15 February, Mr. Zargar and his friends had come to know of Khalsa Aid, an international non-profit aid and relief organisation, who were rescuing and assisting stuck Kashmiri students in central India.

“It isn’t easy to forget”

For three days after the attack, the group didn’t leave the accommodation; subsequently, had no food either. Just snacks at times. “I just wanted an out; I wanted to run away,” he recalls. “People I knew and studied with were calling me a traitor – but, for what? I didn’t post anything; I didn’t blast the bomb; I wasn’t a militant.”

Khalsa Aid had arrived. In the brief moments before their rescue, Mr. Zargar took a calm look at his place. He had brought mattresses, utensils, sheets, and had made this house a home. “I packed in hurry and took only what was really necessary,” he says, “and left everything else behind.”

“If I live,” he had thought. “I shall return for my belongings.”

He stepped outside to board an AC bus, leaving behind his dreams and memories – a few good as well. “Irrespective of how educated I am, people [in mainland India] will only see me as a terrorist,” he felt.

The bus took them to Chandigarh and then to Jammu. From there, they reached Kashmir via national highway on their own on 22 February 2019. “When I reached home [in Trehgam], I hugged my mother,” he recalls, “and she kissed me. I felt alive again.”

Four months later, in June 2019, Mr. Zargar went back to Dehradun – after coordination with J-K Students’ Association and local police – to complete a couple of remaining practical examinations. His room was the same as he had left, though. Beds undone; books strewn; dust on ceiling fans and sour memories.

Irrespective of how educated I am, people [in mainland India] will only see me as a terrorist.

His dreams of the prefix; of contributing to agriculture in Kashmir; of learning more came to a dead-end. The only way out, that he can see, is enrolling abroad. But finances are an issue.

To make his profile for potential fellowships, he is working on research papers alone. “If I had a mentor, things would have been different,” he says. “But, I don’t want to go back. I need to compromise my dignity for that. I hate that place.”

Though the government-imposed communication blackout again pushed him out of the Valley and landed him at a friend’s place in Jamia Nagar, Delhi. But protests against a citizenship bill, which grants citizenship on the basis of the religion, discriminating against Muslims, broke out there too. On any other day, he would be looking for a quick exit from Delhi; but without internet, he is helpless in Kashmir.

“I’m just convincing myself that it’s a phase,” he says, “and it too shall pass.”

Yashraj Sharma is an Assistant Editor and Features Writer at The Kashmir Walla.

The story orginally appeared in our 17– 23 February 2020 print edition.

‘Not 90s anymore’: Silence, solidarity, and guards in Shopian village after Pandit attacked

‘Fear will never leave’: Budgam siblings together in life and death

‘Left us in eternal pain’: Dreams and life of teenager killed in Srinagar attack