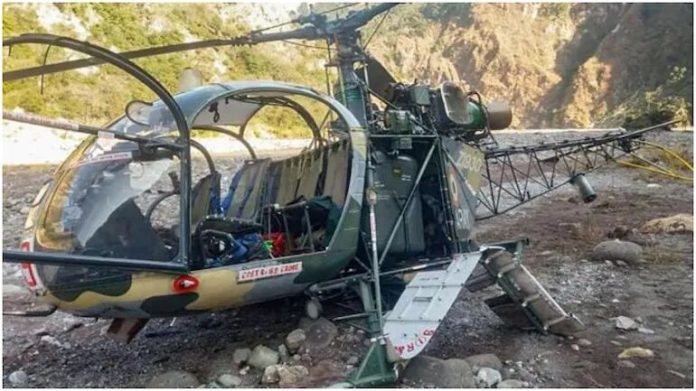 An injured pilot of an Army Cheetah helicopter, which crashed near the Line of Control (LoC) in north Kashmir’s Gurez sector a day ago, was shifted to the military command hospital in Udhampur for treatment.

Officials said that the pilot lieutenant Colonel Vivek Kumar Dwivedi has been removed to Command Hospital in Udhampur now.

On Friday afternoon, the chopper crashed at Tulail in Gurez while on a routine mission to evacuate an ailing soldier from a forward post. As per officials, the helicopter lost contact with the forward post at Gujran, Baraub.

Soon after, a search operation was launched by the Indian Army and rescue helicopters were pressed into service to locate the duo.

But the co-pilot Maj Sankalp Yadav succumbed to his injuries at army’s 92 Base Hospital in Srinagar while the injured pilot was further evacuated to Command Hospital in Udhampur.

A probe to find the cause behind the crash is underway. (KNO)