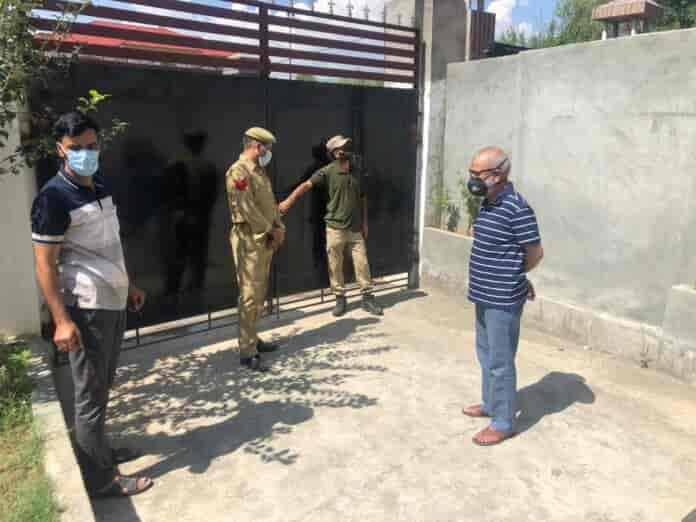 On Thursday, several leaders of the People’s Democratic Party (PDP) were stopped by the police from leaving their residences to attend a party meeting scheduled at 11 am.

Talking to The Kashmir Walla, Mohit Bhan, spokesperson of the PDP, said that the meeting was supposed to be attended by all district-level leaders. However, he said, the leaders who were under house arrest were not allowed to attend the meeting. “The leaders include GNL Hanjura, Abdul Rehman Veeri, Naeem Akhtar, Sartaj, Khurshid Alam, Aijaz Mir, Waheed Rehman Para, and Mohd Yousuf Bhat,” said Mr. Amin.

In a purported video, Mr. Akhter, a senior party leader, was disallowed by the policemen manning the door of his residence in Srinagar. “Sir, you are not allowed [to leave]. I called the higher-ups [and they have not allowed],” one of the policemen can be heard saying in the video. In a reply, Mr. Akhter asked for an order disallowing him. Later in the video, Mr. Akhter asked a policeman if he can leave by walking; he was disallowed, again.

Later, Mr. Akhter wrote on Twitter: “Despite being free on paper and in govt submissions in HC and SC, PDP Leadership continues to be under illegal detention, without any official orders. Video from today – I wasn’t allowed to attend the PDP meeting nor were any of my colleagues.”

The party’s also shared a video on Twitter, where Mr. Hanjura was disallowed by the policemen. “Administration that brazenly lied and misled Hon’ble High Court,” the PDP wrote on Twitter. “Here General Secretary GNL Hanjura Sb not allowed to proceed further to attend the party meeting.”

Earlier, Party General Secretary, Mr. Hanjura, called “an important meeting” of the senior party leaders and functionaries at the PDP headquarters in Srinagar. The meeting was scheduled to discuss the prevailing political situation and general party affairs.