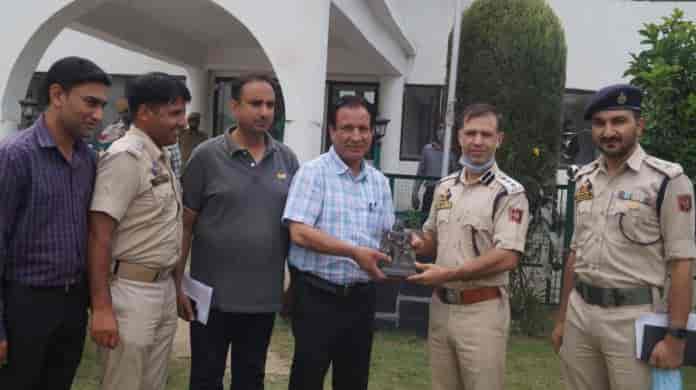 Jammu and Kashmir Police has recovered a twelve hundred year ancient sculpture from a local in Khansahib area in central Kashmir’s Budgam district after getting reports that the local was attempting to sell it.

An official told news agency Kashmir Dot Com (KDC) that the ancient Sculpture was recovered from the house of Nawaz Ahmad Sheikh son of Abdul Rashid Sheikh, a resident of Yarikhah Khansahab during the search.

He said that he was attempting to sell it but police recovered it from him before being sold.

Police in a statement to news agency Kashmir Dot Com (KDC) said “Yesterday afternoon, upon a specific information, Budgam Police recovered one ancient sculpture from Khansahib area. Accordingly Officers team of department of Archives, Archaeology and Museums, J-K Government were called for examination of the recovered sculpture and who reported to District Police Office Budgam on Today and established that the said sculpture is the sculpture of goddess Durga which dates back roughly to 7th-8th AD (about 1200 years old).”

They said the sculpture is 12”x08” carved in a black stone. This sculpture is of goddess Durga seated on a lion throne along with 04 attendants.

Pertinent to mention that the said sculpture was found from river Jhelum at Pandrethan Srinagar by labourers who were extracting sand from river on 13th August 2021, the statement added. (KDC)