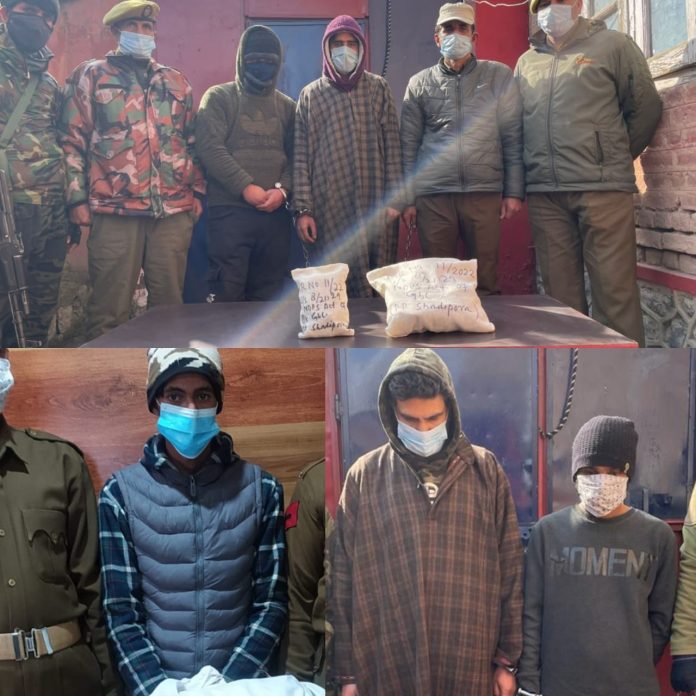 Police in a statement said that in district Ganderbal officers intercepted a vehicle (Wagon-R) bearing registration number JK16-5580 with two persons on board.

“They have been identified as Showkat Ahmad Ganie son of Sonaullah Ganie resident of Baroosa and Imran Shah son of Ijaz Shah resident of Bijnor UP A/P Panzinara Srinagar,” police in the statement said.

The police claimed that during search the officers were able to recover 200 capsules of Spasmoproxyvon Plus and 24 bottles of Codeine Phosphate from their possession.

Police said that at another check-point in the district the cops intercepted a vehicle (i-10) bearing registration number DL7C-9184 with two persons on board.

“Officers were able to recover 312 banned Capsules and 17 bottles of Codeine Phosphate from their possession,” police said.

Jammu and Kashmir Police also claimed that in district Budgam, during patrolling they arrested a drug peddler along with 14Kgs of grinded Cannabis Powder near Kralpora Petrol Pump.

Police has asked the citizen to come forward with any information regarding drug peddlers in their neighbourhood.

“Persons found indulging in drug peddling will be dealt as per law. Our consistent actions against drug peddlers should reassure the community members that we are making efforts to keep our society free from the scourge of drug menace,” J-K Police in the statement said.