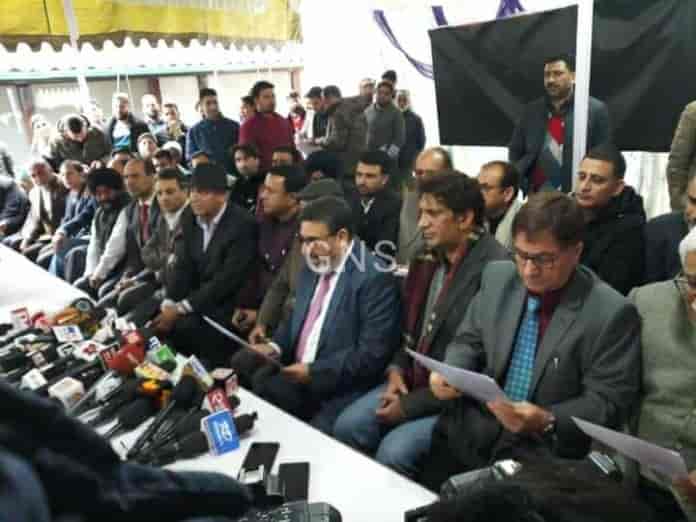 Mr. Bukhari said that he had been waiting for the last seven months hoping that National Conference (NC) and People’s Democratic Party (PDP) would come out and raise the issues confronted by the people.

The launch came at a time when three former chief ministers, and many other top leaders, remains under either detention or house-arrests.

Before the launch of the party, talking to The Kashmir Walla, a senior leader of the newly launched party, Ghulam Hassan Mir, said, “Shall we mourn for the continuous detention of former three chief ministers? Shouldn’t we move forward? In any democracy, detaining political leaders is not a good step. But right now, it should not be the problem to talk about the problems faced by common people.”

“Except some senior leaders, rest of the leadership is out – why are they not doing any political activity?” added Mr. Mir. “NC is not only Farooq and Omar Abdullah neither PDP is only Mehbooba [Mufti].”

Mr. Bukhari, at the launch, also said, “Unfortunately, they have not come out. Political parties don’t cease to exist once their leaders are arrested. Now, most of their leaders have been released, if not the presidents of the parties. We believed they would talk about issues, but they chose silence. We thought it necessary to flag issues.”

“Why shouldn’t we raise this issue? Bureaucracy is acting like as if there is martial law imposed in Jammu and Kashmir. Why shouldn’t we talk about it?” said Mr. Bukhari. “J-K Bank has been converted into sub-office of the anti-corruption bureau. We are aware of these issues and will raise them, come what may.”

Syed Mohammad Altaf Bukhari has been unanimously elected as the President by the members of his new political party. The ex-PDP minister’s name for the post of President was proposed by former minister Ghulam Hassan Mir and was seconded by former legislator and Chief Secretary Vijay Bakaya and other ex-legislators.

The meeting over dinner took place at the residence of Altaf Bukhari at Sheikhbagh Lal Chowk on Saturday evening. All the participants in the meeting later unanimously reposed their support and elected Bukhari as their President.

Someone has to take a step to address them and form solutions for betterment.
Commenting on the claim that the party is BJP-B. He says time will decide the claim. “Time will decide whether we are doing this for the welfare of people or playing a role for another party.”
Any new things that come into public here have always been farmed wrongly or negatively
When we are coming in the field, starts doing work and shows our performance, people and intellectuals have every right to critique us. But, before doing anything why is there is so much negativity towards us.

Any political party whether existing or a new one should set criticism only after their work. Before doing anything this should not be the approach.