End the politics of fear and polarisation 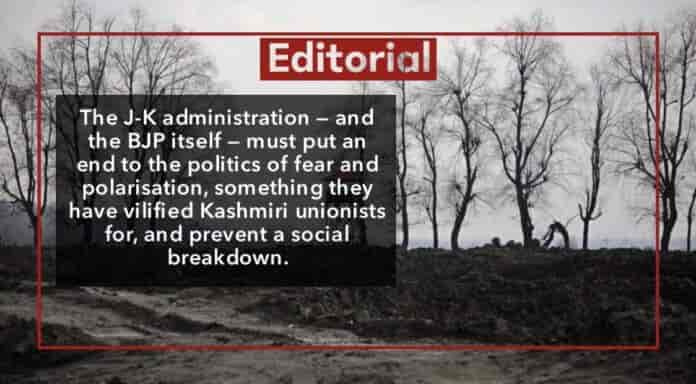 The administration bludgeoned forest dwellers late last year despite the Forest Rights Act (FRA) of 2006 — a progressive law denied to the erstwhile state by Kashmiri unionists — having been imposed in Jammu and Kashmir ( J-K) on 5 August 2019. Amid an uproar over forcible demolitions, the administration announced the implementation of FRA but is now faltering as it rushes to meet the self-given deadlines for implementing the law. As with other central laws, the J-K administration is evidently ignorant of and incompetent, willfully or otherwise, in abiding by the rules. This has only fanned rumors and speculation of big industries eyeing Kashmir’s pristine forests. Where once the outbreak of militancy led to a breakdown of administration and wanton loot of the forests, today the loot is being sought to be given official sanction.

The historical denial of justice and empowerment to the J-K’s forest dwellers — scheduled tribes, scheduled castes, and other ethnic groups — must end by ensuring effective implementation of the FRA. The land is also at the center of controversy in Jammu were a disinformation campaign around the controversial Roshni Act, scrapped by the High Court, attempted to project it as a massive land grab by Muslims “to alter Jammu’s Hindu demography”. For decades, Jammu’s Muslim majority colonies have awaited regularisation but have been denied for reasons that are well known to one and all. Prosperous Muslims have long been an eyesore for India’s Hindu rightwing. Today, faced with the lack of political clout, a motivated administration, and indifference of the courts, Muslims of Jammu are constantly looking over their shoulders — for the impending arrival of bulldozers. As such, the J-K administration — and the BJP itself — must put an end to the politics of fear and polarisation, something they have vilified Kashmiri unionists for, and prevent a social breakdown. After playing Jammu against Kashmir for decades, the Centre must realize playing Hindus against Muslims will open a new pandora’s box.