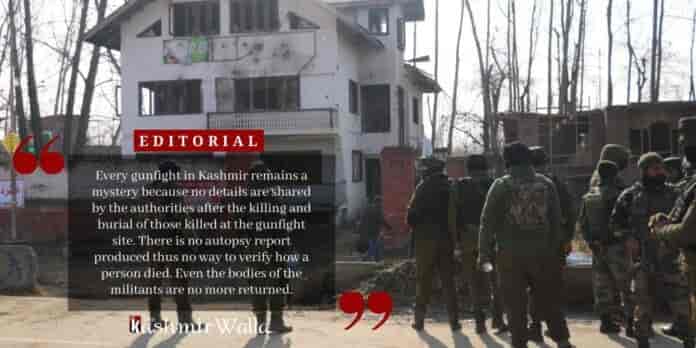 In 2020, one gunfight turned out to be fake even after the government forces had claimed it had killed militants in the Shopian district of south Kashmir. Three laborers were abducted, killed, and branded as militants, as revealed by the police investigation. The probe in this gunfight turned out to be a positive step towards accountability and transparency. And if the accused are sentenced for their crime of murder then the families of three laborers can have a sigh of relief. But it shouldn’t have ended with just this probe, which is yet to see the light of complete justice. The Shopian fake gunfight should have been treated as a lesson to repeat in the future. In the past also, the government forces have been accused of staging gunfights, like in the case of north Kashmir’s Machil. Last week, a gunfight again raised several questions — not just among people, but even government officials. As soon as the families of south Kashmir appeared to claim that the three killed on the outskirts of Srinagar were their children, the public was reminded of Shopian. Though, the police and Army both stand on their version that the three were helpers of militants. However, the administration led by Lieutenant Governor Manoj Sinha should take these incidents as a moment to change policy. Every gunfight in Kashmir remains a mystery because no details are shared by the authorities after the killing and burial of those killed at the gunfight site. There is no autopsy report produced thus no way to verify how a person died. Even the bodies of the militants are no more returned. The new counterinsurgency policy has instead of curbing what the government calls “glorification of militancy”, only added to an environment where government forces can escape accountability. Perhaps, the Army captain couldn’t have done Shopian without the policy in place. All of this will only add to the trust deficit. If the autopsy report of the three killed in Srinagar is investigated, there is a possibility to find out more. The government can’t go on a killing spree without realizing that its impact is on the general population. It is this sentiment that led to the shutdown of Srinagar’s parts.

Previous articleEnforced jokes on Kashmiris: when does a comedian go too far?
Next article“Govt has rejected us as citizens”: Pakistani wives of ex-militants reiterate deportation demand