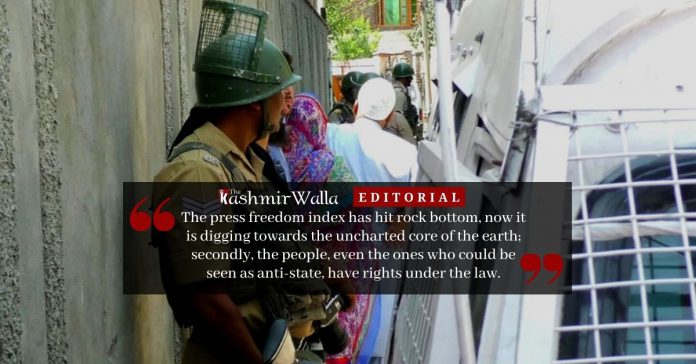 Since the civilian killings in Kashmir, the authorities have launched a massive valley-wide crackdown. In the last two weeks of October, at least 23 people have been killed – eight civilians, five personnel of the Indian army, and ten militants. And over 900 persons have been detained.

The civilian killings, with six only in the capital city, including four persons from minority communities, sent the government machinery into a frenzy. The home minister called two emergency security review meetings in New Delhi. Then the raids followed. Hundreds have been either arrested, detained, or summoned for questioning. There have been back-to-back gunfights too – in which at least ten militants have been killed, as per the police.

However, in one such gunfight, in north Kashmir’s Bandipora district, the family of Imtiyaz Ahmad Dar alleged that he was picked from the paddy fields – and a few days later it was said he died in a gunfight. Police refuted the allegations vehemently.

In the last few years, nearly a dozen families have questioned the integrities of the government forces’ actions, in which they claim civilians have been passed on as “terrorists”. In another incident, a civilian was shot dead at a checkpoint in Anantnag district; as police claimed he jumped the checkpoint and the fire was opened. His family argues the paramilitary forces could have shot as warning or on tyres of the vehicle too. No probe has been ordered yet in the incident.

With a sense of sheer impunity and an apparent lack of accountability, these actions are spiralling the conflicted region into more uncertain times. And further metamorphosing the region into an Orwellian state. Speaking of the Orwellian state, Kashmir’s own Ministry of Truth has again clamped down on the messengers. Tremendous pressure remains on the journalists in Kashmir – the majority of whom have either stopped writing or self-censor themselves apprehensive of government action against them.

At this point, the federally-run government shall remember two things: the press freedom index has hit rock bottom, now it is digging towards the uncharted core of the earth; secondly, the people, even the ones who could be seen as anti-state, have rights under the law. The rights of the general public and the press shouldn’t be trampled in the garb of the crackdown.