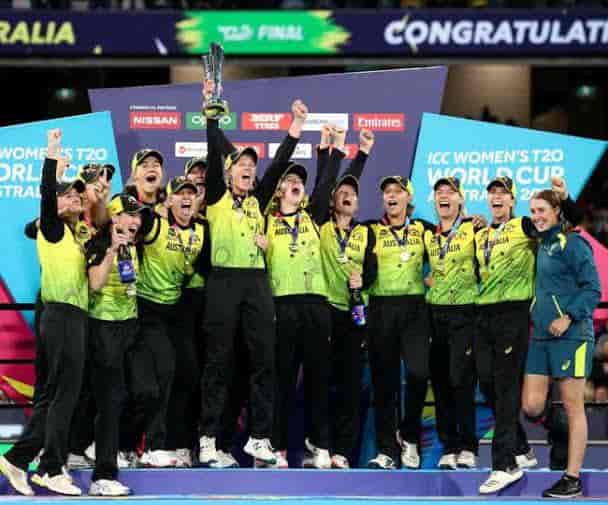 Australia claimed its fifth Women’s Twenty20 Cricket World Cup title after thrashing India by 85 runs in Sunday’s final at the Melbourne Cricket Ground.
Alyssa Healy and Beth Mooney starred for the defending champions in the summit clash, completing their respective half-centuries, as the hosts overpowered the Harmanpreet Kaur-led India.

The Australian women’s team showed that it has some of the characteristics historically displayed by their male counterparts, especially in rising to the big occasion. With an attendance of 86,174 at the Melbourne Cricket Ground, it was billed as the biggest women’s cricket match ever, and it delivered in every respect other than the contest on the field, which ended in an 85-run win for the hosts and their fifth world title in this format.

Mitchell Starc may have prompted a few raised eyebrows when he left his team in South Africa to cheer for the women’s team in the ICC Women’s T20 final, especially his wife Alyssa Healy. But the latter made his decision worthwhile with an innings of such belligerence that it reminded some of Adam Gilchrist and Ricky Ponting in 2003 final. After she departed, it was Beth Mooney who took up the mantle and though the scoring rate came down ever so slightly, it was more than what the Indians, more used to 130-150 range matches, were used to getting in big games.

The Indian bowlers, all but one of the spinners, played into the hands of Healy and Mooney by bowling all over the place. The Aussies also showed they were quick learners and handled leg-spinner Poonam Yadav much better, camping on the backfoot most of the time, and not rushing at her like they did in the tournament opener. It was, admittedly, a much better wicket to bat on and right down the Aussies alley. Also dropped catches, one in the first over itself which went for 14 runs, and fielding lapses did India no favours.

Among the Indians, Shikha Pandey was the most expensive out of the lot. She conceded 52 runs in her four-over quota. Deepti Sharma, who had an equally disappointing outing in Melbourne on Sunday, scalped two wickets. Poonam and Radha Yadav were the other wicket-takers, sharing a wicket each.

Meg Lanning’s team showed their class in the way they set about defending their score of 184. India were bowled out for 99 in 19.1 overs but, truth be told, two-thirds of those runs came when the destination of the trophy was all but decided.

Shafali Verma had announced her arrival on the big stage with a straight six off Megan Schutt. She seemed to have the wood on the veteran Aussie, who had promised before the final that she had something up her sleeve against the teenager from Rohtak. She delivered, forcing Shafali to nick behind in the first over itself.

In response, India’s star performer of the tournament Shafali Verma failed to provide the team with the start they would have hoped for. She was removed cheaply on 2 by Megan Schutt in the first over of the 185-run chase.

Previous articleWomen’s Day :Teenage girl commits suicide in Bandipora, second in a day in Kashmir
Next articleThree held for attempting to rape woman Panch in Budgam