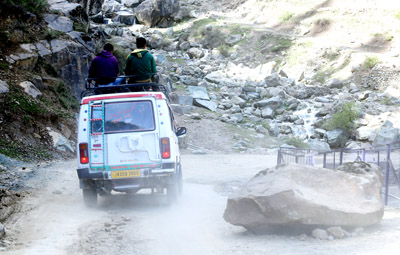 Bandipora-Gurez road was thrown open for traffic on Saturday after remaining closed for more than three months following snowfall. The traffic on the 85 kilometer road stretch will be allowed in a controlled manner and the decision came as Border Roads Organisation (BRO) completed the snow clearance operation in a record time this year, officials told GNS.

Officials said that the first convoy of vehicles was allowed as trial run towards their destination with proper precautionary measures, including the use of chains.

Deputy Commissioner Bandipora Dr Owais Ahmad said traffic will be allowed in a restricted and regulated manner and for restricted hours.

The road remains closed owing to heavy snowfall in Gurez Valley. “The road usually opens in April but this year, the road was opened early.”

The Deputy Commissioner lauded the efforts of BRO and MED for overtime to ensure earlier opening the road.