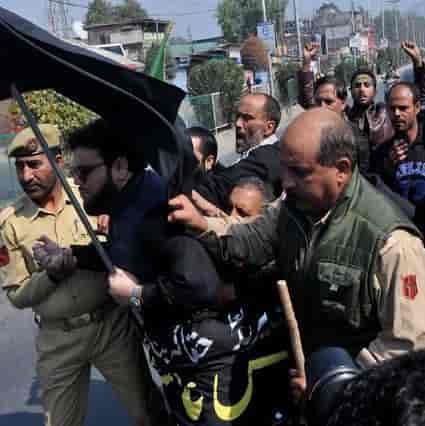 Srinagar: Jammu and Kashmir Anjuman Sharie Shian’s Aga Syed Muntazir Mehdi while reacting to Kalbe Jawad’s claim that the Government of India has given assurance to consider the grant of permission to Youm-I- Ashura Procession from Abi-Guzar to Ali Park said, “We have never accepted the ban and have always resisted the ban,”

He reminded “GOI’s sponsored random Moulana” that right from 1990 Azadars (mourners) have resisted the ban despite receiving the wrath of state in the form of pellets and bullets spending every year Ashura in jails but have never sought permission.
He termed these assurances like Yazid making arrangements to mourn Imam Hussain.

Kashmiri Shia Muslims on social media have lashed out at him questioning his allegiance to the ruling BJP government that has not only abrogated article-370 but also brought in new anti-Muslim laws in India. The laws lead to protests across the country by Muslims of all sects.

In November National Conference leader Ruhullah Mehdi hit out at Jawad. Taking to his Twitter handle, Mehdi said, “Maulana @kalbejawad, I advise you against any misadventure in Kashmir at the behest of BJP. This is not Lucknow, this is Kmr. Our identity is one & unity is paramount for us. You are strictly warned against sowing element of division here in Kmr. Aga Syed Ruhullah Mehdi Al-Musavi,”

Back then Kalbe Jawad while talking to The Kashmir Walla had denied the accusations that he had been in Kashmir at the behest of BJP. “I am not here with any polical motive, I am here at the individual level. It is purely a religious visit,” Jawad said.