After All Party meeting, Kashmir is still at square one 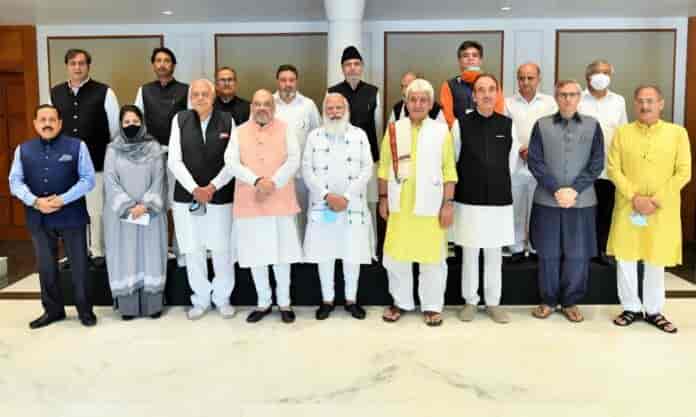 For twenty-two months, since the end of Jammu and Kashmir’s limited-autonomy, the powerful Modi government and Kashmir’s dwarfed unionists were locked in a stare contest that was reflective of the widened gulf between New Delhi and Srinagar.

There was no clarity of the future of relations between New Delhi and the unionists who have been loyal to India’s cause for decades. The fallout of the Modi government’s abrogation of J-K’s limited autonomy on 5 August 2019 has caused an obvious mistrust.

Farooq Abdullah has been an avowed Indian for most part of his political life. When he spoke on 26 June, two days after the high-profile all party meeting in New Delhi, Farooq spoke a different political language that showed signs of shaken faith.

“Let’s not jump. (sic) Let’s see what they do,” Farooq said of the Government of India’s initiative of dialogue. “How do they remove that mistrust or will they continue the mistrust?”

Farooq is the head of Jammu and Kashmir’s oldest party, the National Conference, as well as the regional unionist alliance, People’s Alliance for Gupkar Declaration, that gives more weight to his words.

This month’s invitation to the unionist leadership – derided as the “Gupkar Gang” of anti-nationals – for a high-profile round of talks with Prime Minister Narendra Modi is indicative of the BJP’s reckoning with the fact that it has failed to create an alternative in Kashmir.

The invitation to Kashmiri politicians, who the BJP had trashed into the bin of history, was also indicative that these politicians had outlived the blitz.

However, the Modi government had not only dismissed the resentment in Kashmir that began with its unilateral actions but hinted that New Delhi alone will continue to decide the terms of engagement and oversee the formation of a new political structure.

As per a handout released by the Government of India, Home Minister Amit Shah’s chronology for the future was clear: “Shah emphasized that the delimitation exercise and peaceful elections are important milestones in restoring statehood as promised in parliament.”

The National Conference’s vice-president Omar Abdullah also spoke at the post-meeting press briefing in Srinagar. The former chief minister was clear that Shah’s chronology will not be accepted but shied away from stating a political course of action.

“If we tell people that we will achieve the reversal of 5 August from [Prime Minister] Modi, it would be deceiving them,” Omar said. “[Why] should we deceive the people by saying that we will get it back from those who took it away from us?”

Bhim Singh of the Jammu-based Panthers Party, who was among the fourteen invitees from J-K, described the all-party meeting as continuation of BJP’s “dictatorship.”

“It was just a drama by the Prime Minister to give an impression that entire Jammu and Kashmir is with them, that all political parties are on board,” Singh said. “They [BJP] want to continue their dictatorship.”

A chronology for disaster

Mistrust of New Delhi in Kashmir now runs deeper than it already did. The previous engagements between Srinagar and successive federal governments over the years have been fruitless and forgotten — a fear overshadowing the current process but not without reason.

The outcome of the 24 June meeting is “a repeat of every past engagement with New Delhi in which Delhi has benefitted,” said National Conference’s Ruhullah Mehdi, a three-time legislator who has been critical of the policies of New Delhi and his own party. “A disaster, that’s what came out of this meeting.”

Criticism of the immediate outcome of the meeting within Kashmir had forced the unionist leadership across party lines, Mehdi believes, into a “damage control” mode. “They may have realised that they were bluntly apologetic in Delhi, they may have realised that fact came to fore that they couldn’t even stand for restoration of statehood, forget [restoration of Article] 370, before elections,” he said. “But it’s all posturing, nothing beyond that.”

Mehdi said that the “entire ‘leadership’… were called in to be given a dictation on how to participate in the delimitation commission so that elections can take place and this democracy will start running in Kashmir on the terms of post-August 5 situation”.

Delimitation has been a key demand of the Bharatiya Janata Party’s Hindu vote bank in the Jammu region, the result of a sense of political disempowerment and discrimination, cultivated and reinforced over decades to pit the region against Kashmir.

In the predominantly Muslim Kashmir, the delimitation exercise — the outcome of which, as per Indian law, is unchallengeable in a court of law — is suspected to be New Delhi’s Gerrymandering to skew political power in favour of the Hindu dominated Jammu region.

The only reason for engaging with the Kashmiri leadership then is that the Modi government needed a “face saver in Kashmir” and to “shed the baggage” of its undemocratic actions before global powers, Mehdi said. Nevertheless, it was still an opportunity for the PAGD “had they taken a hard stand and bargained nothing less than they aspired for” but “unfortunately they made a mistake and surrendered”.

King’s parties still have a role

In the nearly two years since 5 August 2019, New Delhi has failed to create a political alternative in Kashmir despite advertising its emergence amid concerted attempts to discredit and demotivate the established unionist leadership.

As such international pressure is being speculated as the reason behind New Delhi attempting to create the semblance of a functional democracy and regional representation.

Dean Thompson, a US government official had earlier stated: “Kashmir is one area where we have urged them [the Modi government] to return to normalcy as quickly as possible… There are other electoral steps we’d like to see them take and that we have encouraged them to do…”

Political scientist Aijaz Ashraf Wani pointed out that elections held without restoring the region’s limited-autonomy would be “more convenient” for parties like the Apni Party, formed by former minister Altaf Bukhari.

The Apni Party is seen as a regional ally of the BJP even though it has claimed to be independent. A former member of the People’s Democratic Party, Bukhari was also invited to the 24 June meeting and described Modi as a “fatherly figure”.

The pro-freedom turned unionist leader Sajad Lone and his Peoples Conference could also reinforce the division of opinion among Kashmiri unionists. Already, his party exited the PAGD over electoral losses in the District Development Councils that it blamed on parties violating the pre poll understanding. In 2018, Lone’s party had contested local elections even as major parties chose to boycott.

But “the question,” Wani, the political analyst, said, “is whether parties like NC and PDP and other constituents of PAGD who have held a consistent stance publicly can afford to go back on it and what narrative they will carry.”

With New Delhi’s refusal to turn the clock back, what will be the political costs of the PAGD’s participation in assembly elections? Wani said that that was difficult to assess at the moment. He only had more questions: “Are they going to state that election is a step towards statehood and more? Can public opinion be mobilised around this narrative? And most importantly will they be able to deliver [on electoral promises]?”

The invitation to regional unionist leaders comes four months after India and Pakistan jointly announced a ceasefire that later reports said were the outcome of backchannel talks and amid increasing international scrutiny — particularly from the United States — and the threat of a confrontation with the powerful neighbour and rival China.

While the optics might suggest New Delhi’s softening of stance in talking to regional leaders and restoring electoral process in the region that has been under its direct rule since 2018, analysts say more is needed to end the political stalemate.

The Modi government, observed Srinagar-based political analyst Noor Baba, is “going as per its own priorities” with delimitation being on top of the agenda. “If they are going the way the Home Minister has said,” said Baba, “Then I think they will hardly win over the confidence of the people here.”

“If they first go for reorganisation of constituencies, which is being contested by many leaders, this was singled out for Kashmir. It is part of this process of singling out Kashmir that has begun on 5th of August, to deal with Kashmir unilaterally,” said Baba. “It doesn’t give any hope that they want to address concerns created as a result of 5 August.”

Besides the Modi government, Baba also sought clarity from the Kashmiri unionist leadership on Kashmir’s collective concerns – of protecting its demographic identity and resources – and a roadmap to address those.

Instead of optics of engagement, Baba said “better assurances” were needed from the Government of India “because the way they have acted on 5 August was contemptuous to people and leadership of Kashmir on both sides of the [unionist – pro-freedom] divide.”

“The way the alienation has gone so deep, to restore that very strong measures need to be taken,” he said. “People have already lost the trust in the process and the local leadership. I don’t find much hope for people to have any lesser degree of alienation or have some kind of trust regained for these leaders.”

“Without anything substantial,” he observed, “people will not take it easily.”

A policeman was killed while his daughter was injured in a militant attack at Aanchar Soura area of Srinagar...
Kashmir