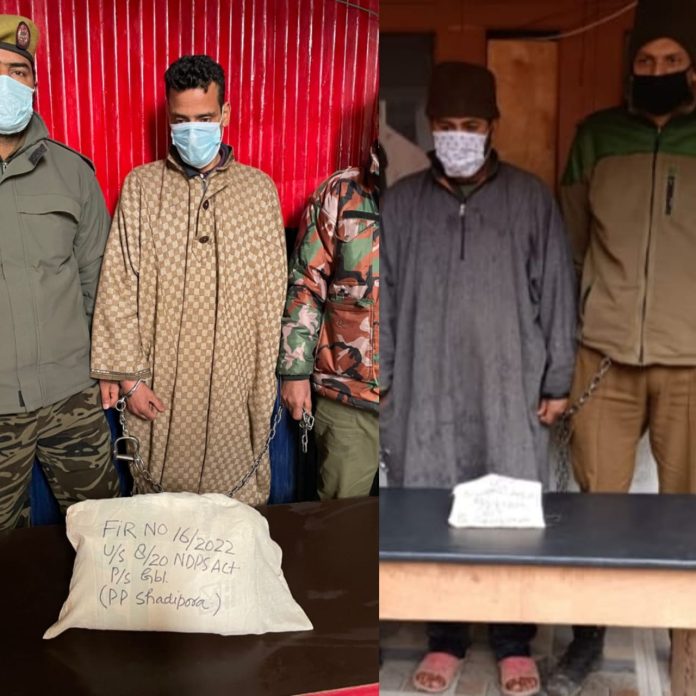 Jammu and Kashmir Police on Monday claimed to have arrested two drug peddlers in central Kashmir’s district Ganderbal and recovered contraband substances from their possession.

Police in a statement said that they established a checkpoint at Paribal Chundina Road intercepted a suspicious person identified as Bashir Ahmad Malla son of Mohd Sultan resident of Tul-Mohalla Shalabugh.

“During search, officers were able to recover 02kgs of Cannabis powder from his possession. He has been arrested and shifted to Police station,” police said.

Police said that in PP Nagbal at a checkpoint established at Buserbugh intercepted a vehicle driven by Irshad Ahmad Khan son of Samad Khan resident of Asham Safapora.

“During checking, officers were able to recover 60gms of Charas from his possession. He has been arrested and shifted to police station where he remains in custody. Vehicle used in the commission of crime has also been seized,” police said.

Police said that cases under relevant sections of law stands registered at respective police stations and investigation have been taken up.

Previous article2-way traffic on Srinagar-Jammu highway tomorrow: Authorities
Next article“Law under which delimitation process was initiated is challenged in SC”: CPIM