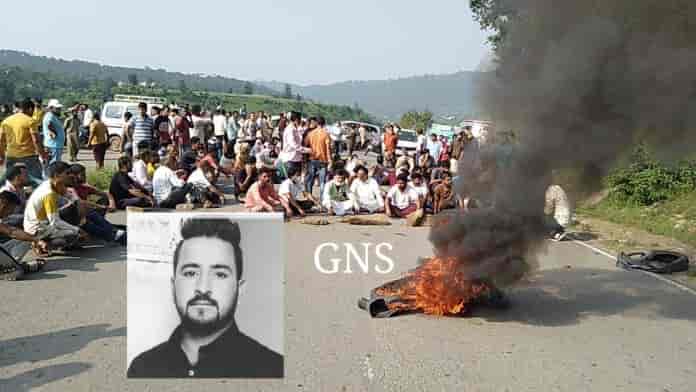 Jammu, Aug 11: The alleged murder of a youth in Rajouri district of Jammu and Kashmir sparked protest which led to blocking of Rajouri-Poonch highway on Wednesday.

The 28-year-old youth Ankush Kumar was “murdered” after being stabbed while asleep inside his house in Rajouri during the intervening night of Wednesday, GNS reported.

The protest started by Kumar’s family members was joined by relatives and neighbours who demanded the culprits be brought to justice.

“Unknown assailant(s) entered the house of Ankush Kumar Sharma, son of Bachaan Kumar Sharma, in Chakli village late last night at around 1 am and stabbed him to death when was asleep,” the news agency reported. “Family raised hue and cry after noticing the murder even as it was not immediately known if the assailant(s) fled before or after the family saw Ankush dead.”

Soon a police party from Chatyar police post reached the spot and recovered the “weapon of offense”. The police team also took the body into possession for medico-legal formalities.

GNS quoted a police officer as saying that investigations have been started.  The killing has sent shockwaves in the entire village.

On Wednesday morning, the family members of the slain youth, joined by relatives and neighbours, took to a road near Chakli and blocked Rajouri-Poonch highway. Burning old vehicle tyres, the protesters demanded immediate action against those responsible for the “murder”.

The protest was going on when this report was filed even as higher officials from police and administration were trying to persuade the protesters to disperse to restore traffic on the busy thoroughfare.