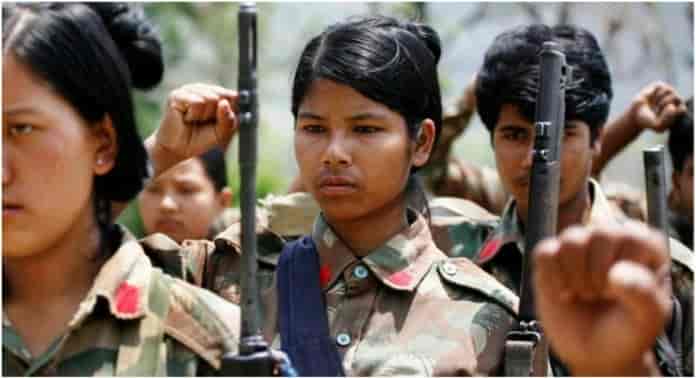 In Chattisgarh and Maharashtra, around 40% of Maoist cadre comprises of women, several of them are commanders of various units of the banned ultras and are often involved in clashes with security personnel, Hindustan Times quoting a senior Chhattisgarh police officer has reported.

However, women representation in the decision making process of the Maoist is still very low, he added.

Sujata (65), in charge of South Bastar division of Maoists’ Dandakaranya Special Zonal Committee (DKSZC) was one among the key planners in almost all ambushes in South Bastar, which is the core area of Maoists in the country. Even at 65, she carries an AK-47 and speaks six languages including local Halbi and Gondi, the police officer quoted above said.

Sujata, the wife of senior leader Mallojula Koteswara Rao alias Kishenji who was killed in 2011 in an operation, is in-charge of logistics and other support in the Teklaguda attack this April, in which 22 security personnel were killed.

“Sujata is very active, sharp and important for Maoists in South Bastar. In the April 4 incident, she was continuously talking to Mandvi Hidma during the ambush. Hidma, the head of battalion number 1 of Maoists, led the attack in Teklaguda on security forces. Sujata and his team were rescuing the injured Maoists and also collecting the arms and ammunition of slain security personnel. Mainly, she has been among the key planners of any big attack in South Bastar,” said a senior police officer posted in Bastar.

Another prominent woman commander is Sujatakka, who is in charge of the Maad division of CPI (Maoist). The ultras are said to have recruited the maximum number of people from this area in the past two years.

“Sujatakka is a powerful woman commander, a member of DKSZC, and she also carries an AK-47. She has been instrumental in hiring many women cadres in Bastar,” the police officer quoted above said. In South Bastar, of the total 653 Maoist cadres, 310 are women and in West Bastar, 169 out of 420 are women. North Bastar division has 106 women among 226 members and the Maad division has 134 women out of the 322 armed cadres in the area, according to police records..

According to figures collected by HT from Chhattisgarh and Maharashtra police, the total estimated strength of armed Maoists in the region is 2,498, of which 1,391 are men and 1,107 women. “So, approximately 40% are women, which used to be less than 20% till a decade ago,” a senior Chhattisgarh police officer said.