“Will hunt down the attackers”: Pakistan PM assures families of slain Hazara miners 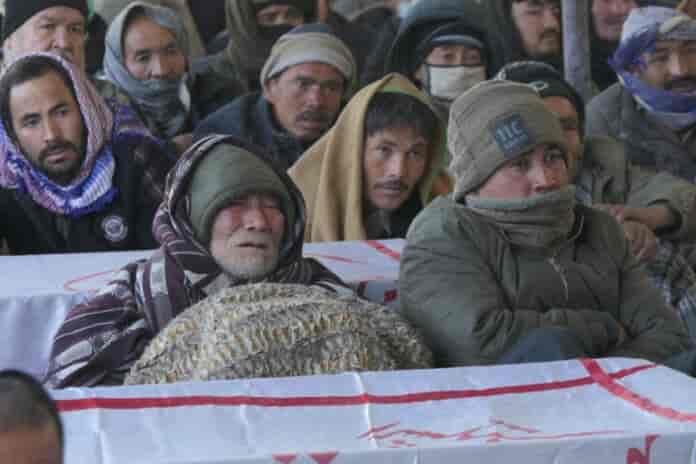 Pakistan Prime Minister Imran Khan met with the families of the slain coal miners – killed on 3 January  in a brutal attack in Mach – and members of the Shia Hazara community, Dawn newspaper reported.

According to the report, the PM’s visit came hours after the miners were laid to rest at the city’s Hazara Town cemetery in what was the culmination of a week-long protest during which the Hazara community and families of the labourers had refused to move ahead with the burials unless visited by the PM himself.

According to Agha Raza, spokesman for the Shuhada Action Committee representing the Hazara community, the prime minister reassured the community that there will be swift implementation of the demands they had put forth.

The Pakistan premier reiterated that the Hazara community will not face similar incidents in the future.

Khan extended his heartfelt condolences to all those who lost their loved ones in the tragic incident.

The premier speaking to the families said that he had visited the community in the past as well and that he was aware of the tragedies that the community had been suffering.

“When the war on terror was going on, and people were afraid to visit your Imam Barghas, I visited your community even then,” he was quoted as saying by Geo Television.

The Pakistan premier said that he was aware of the sectarian group that targeted the Hazara community and that the last time that he had visited the place and taken their name, the group had threatened him as well.

“I understand all of your issues; I might be the only politician who understands your 20-year [struggle],” he said.

The prime minister said that the intelligence agencies had informed the government last March that India wanted to spread sectarian violence in Pakistan by killing Shia and Sunni scholars.

Lauding the Inter-Services Intelligence (ISI), he said that the agency had apprehended culprits and averted several attacks that could have led to sectarian violence.

“When this incident took place, I had no doubt that it was a part of a larger game — it was a step towards spreading violence in the country,” he said.

The prime minister said that “keeping the situation in mind, I had first sent the interior minister your way”.

“The first thing that we had to do was [console] the families who endured heartbreaking setback — Amna bibi, whose five brothers were martyred and Mohammad Sadiq, a brother of six sisters was also martyred.”

“That is why I had sent the interior minister first so that we could assure the families that we would not abandon them.”

“The second thing I wanted to convey to the Hazara community was that we will [hunt down the people involved in the attack],” he said, adding that he was in constant contact with the intelligence agencies in this regard.

“These are 35-40 people who have spread terror in the country; in the past they were known as Lashkar-e-Jhangvi, and now they are a part of the extremist group Daesh,” the prime minister said.

“Several of the terrorists have been killed; however, 35-40 of them are left, and now a complete programme is in the works, including a security forces’ cell whose only responsibility will be to ensure your (Hazara community’s) safety and hunt down those responsible,” he said.

Eleven miners were brutally massacred on Sunday, 3 Jan, when armed assailants entered their residential compound in the Mach coalfield area of Balochistan where they were sleeping, blindfolded, and trussed them up before executing them. The militant Islamic State (IS) group, also known by the Arabic acronym Daesh, claimed responsibility for the attack.