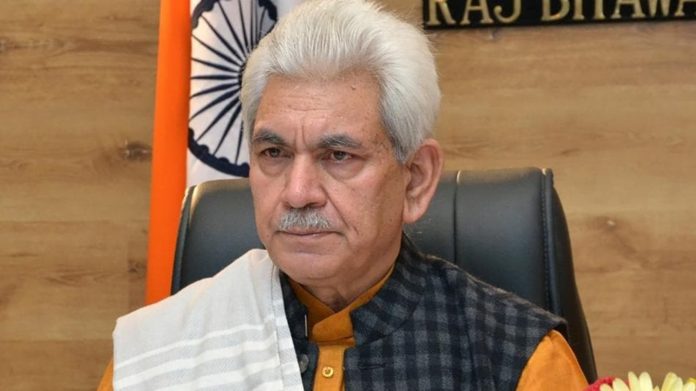 Jammu and Kashmir Lieutenant Governor Manoj Sinha on Sunday chaired a high-level meeting of the Shri Mata Vaishno Devi Shrine Board, which is managing the yatra to the temple. He announced additional ex-gratia of Rs 5 lakh fpr deceased and sought reasons that led to thw stempede.

Officials sources told news agency—Kashmir News Observer (KNO), that Lt Governor Sinha, who is also Chairman of Shrine Board chaired a high level meeting where Chief Executive Officer among other board members were present.

Lt Governor took stock of situation post stampede in which two women among twelve pilgrims lost their lives. “He sought detailed report on the reasons that caused stampede,” they said.

Sources said that LG also announced an additional Rs 5 lakh ex-gratia to the next of kin who died in the stampede at Vaishno Devi shrine.

Now, an ex-gratia of Rs 15 lakhs will be given to their families. A total of 12 persons died and 16 were injured in the stampede at the Vaishno Devi shrine. Nine of the injured were discharged from the hospital.

The bodies of deceased pilgrims were shifted by Air and Road to their native destinations by the Shrine Board Administration with the assistance of UT Administration.

The stampede took place at around 2:45 am near gate number 3 at Shri Mata Vaishno Devi Bhawan on Saturday. Police said that as per initial reports, an argument broke out which resulted in people pushing each other, followed by the stampede.

As per officials, National Green Tribunal has capped the normal capacity of Yatra per day to 50000. Keeping in view the COVID-19 Pandemic, 35000 pilgrims were allowed to proceed for yatra on 31st December 2021 and for 1st Jan. 2022.

Officials told KNO that Sinha who is also the Chairman of Shri Mata Vaishno Devi Shrine Board, was informed about the incident at 3:00 am and since then he monitored the situation.

Lt Governor constituted an inquiry committee headed by Principal Secretary (Home) with ADGP, Jammu and Divisional Commissioner, Jammu as members to probe the incident and submit report within a week.

As an immediate response and for the information of the devotees, Shri Mata Vaishno Devi Shrine Board has established a dedicated helpline, which can be approached at Phone No. 01991-234804 and 01991-234053.