Use tech tools to enhance pace of justice, says CJI 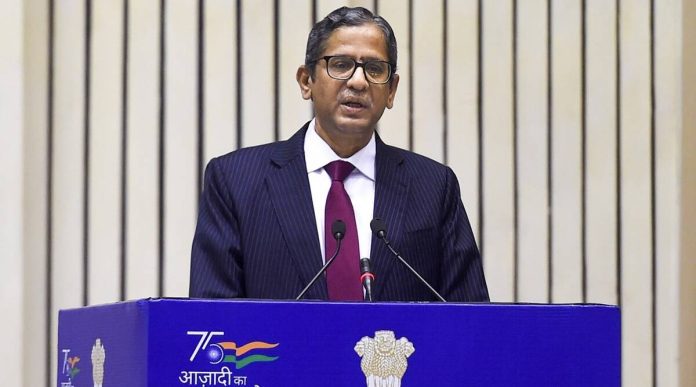 Chief Justice of India N V Ramana Saturday termed access to justice ”a tool for social emancipation” and said only a small percentage of the population can approach courts while the majority suffers in silence, lacking awareness and necessary means.

Technology has emerged as a great enabler, the chief justice of India (CJI) said and urged the judiciary ”to use modern technological tools to enhance the pace of justice delivery”.

Justice Ramana was addressing the first All India District Legal Services Authorities Meet here in which Prime Minister Narendra Modi urged the judiciary to speed up the release of undertrials languishing in jails awaiting legal aid.

”Justice: Social, Economic and Political – that is the vision of justice which our Preamble promises to every Indian. The reality is, today, only a small percentage of our population can approach the justice delivery system, when in need. A majority of the people suffer in silence, lacking awareness and necessary means,” he said.

Echoing the prime minister’s views on providing legal aid and ensuring the release of undertrial prisoners, he said one of the most important aspects which calls for active consideration and intervention of the legal services authorities in the country is the condition of undertrials.

”The prime minister and the attorney general have also rightly flagged this issue in the recently held conference of Chief Ministers and Chief Justices. I am happy to note that NALSA (National Legal Services Authority) is actively collaborating with all stakeholders in securing the much-deserved relief for undertrials.” Justice Ramana said India, the second most populous country in the world with an average age of 29 years, has a large workforce.

”However, skilled workers are estimated to be only three per cent of our total workforce. We need to harness the full potential of the youthful demographic profile of our country. With the western world increasingly falling short of skilled human resources, it is India’s turn to fill the gap, globally,” he said.

The CJI termed the district judiciary the backbone of the justice delivery system of the world’s largest democracy.

They are the first point of contact for much of the population and its strengthening is ”the need of the hour”, he said.

This casts a great responsibility on the district judiciary which must undertake multi-faceted tasks and roles as they are best placed to understand people’s problems and social issues,” the BJI said. Justice Ramana hailed the services provided by NALSA following its inception 27 years ago and said, ”The fact that it is aimed at offering free legal aid to 70 per cent of our population, makes NALSA the largest legal aid provider in the world.” Many of the objectives of NALSA have been translated to social realities and this was made possible because of the sincere effort of dedicated judges and advocates, he said.

These ADR mechanisms have the potential to transform the legal landscape of India by providing millions of people a platform to settle their grievances, he said.

”Matters ranging from matrimonial and intergovernmental disputes, government contracts and land acquisition can be attempted to be resolved through mandatory ADR. This will not only reduce pendency and backlog but also will provide a much-needed speedy justice to affected parties,” Justice Ramana said.

The two-day meet, organised by NALSA, is being attended by over 1200 delegates across the nation including the principal district and sessions judge of all the judicial districts and ex officio chairpersons of DLSAs and would discuss the implementation of the Unified business process for providing effective legal aid to marginalised and poor. (PTI)