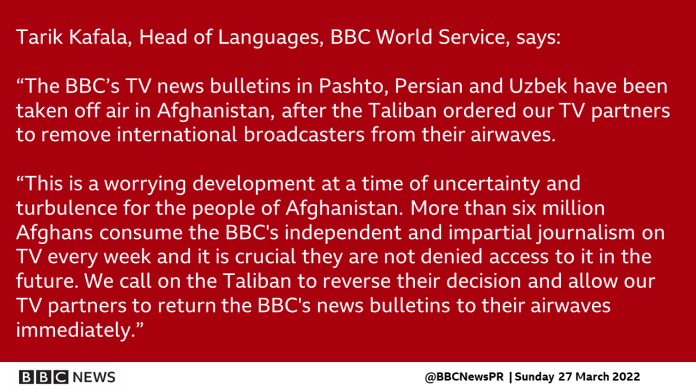 British broadcaster on Sunday said that BBC’s TV news bulletins in Pashto, Persian and Uzbek have been taken off air in Afghanistan.

It said that the decision comes after the Taliban regime ordered television partners to remove international broadcasters from their airwaves, according to the.

“This is a worrying development at a time of uncertainty and turbulence for the people of Afghanistan. More than six million Afghans consume the BBC’s independent and impartial journalism on TV every week and it is crucial they are not denied access to it in the future,” Tarik Kafala, head of languages at BBC World Service, said in a statement.

Kafala also called on the Taliban to reverse their decision and allow “our TV partners to return the BBC’s news bulletins to their airwaves immediately.”

According to the broadcaster, the BBC World Service has been providing news, science, entertainment and other programmes to its viewers, readers and listeners across Afghanistan for decades.

The BBC in its Pashto website reported that the show, which has been aired on local Shamshad TV across Afghanistan for years, was not aired on Sunday evening.

The BBC’s Farsi and BBC Uzbek television broadcasts in Afghanistan, through Ariana and Arezo TV, have also been shut down for the past few days.