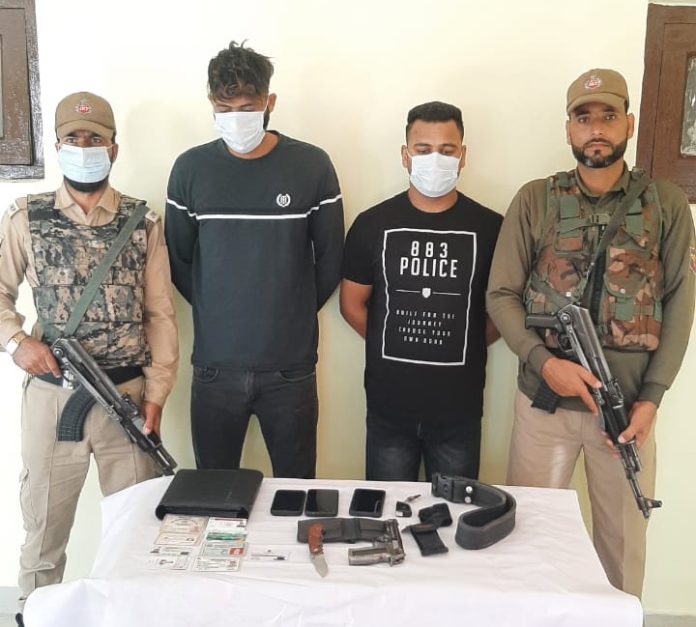 Police on Friday said that it has arrested two extortionist along with toy pistol, dagger and other valuable items in Lal Bazaar area of Srinagar district.

In a handout, the police said that a information was received by Lalbazar police station from one complainant namely Syed Abbas Hussain a resident of Bagwanpora Lalbazar that during the interviewing night of 11/12 October 2022, he was intercepted at molvi stop Lalbazar by two unknown persons carrying pistol and a dagger.

As per the police, the victim was bundled into an Alto car and was taken to Nalabal area, where they decamped with some cash and his valuable belongings.

According to police spokesman, on the basis of this information case FIR no 64/2022 U/S 365, 392 IPC, 7/25 I.A act was registered at police station Lalbazar and investigation was set into motion.

For speedy investigation a special team under the supervision of SDPO Hazratbal Azhar Rashid, SHO Lal Bazaar was constituted. The police team with the help of technical and human sources were able to zero down both the accused involved in this extortion and finally both the accused namely Arsalan Manzoor Dar son of Manzoor Ahmad Dar resident of Awantabawan Soura and Basit Bashir Dar son of Bashir Ahmad Dar resident of Awantabawan Soura were arrested and from their possession one pistol ( seemingly dummy), dagger, mobile phone and other valuable items of victim were recovered, reads the statement.(GNS)

Previous articleFruit-laden trucks faced difficulties due to bumper crop: Div Com Pole
Next articleTwitter to soon allow users ability to control who can tag them in tweets