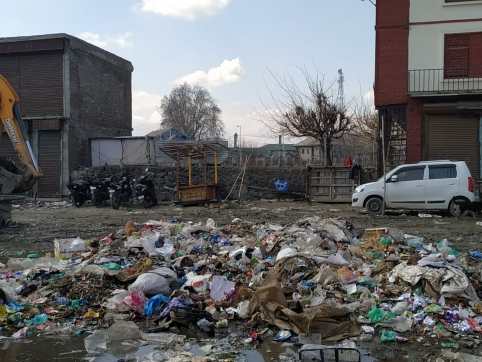 Residents of north Kashmir’s Sopore town on Wednesday alleged that the town has been turned into a garbage dump with heaps of garbage present on the roadside.

“In many areas, including the main market, the town has been turned into a garbage dump as garbage is present on the roadside due to the non-availability of any proper garbage dumping site in the area since long time,” locals said.

They said that administration has failed to put in place effective measures for solid waste management.

They said that their failure to arrange a garbage dumping facility here has evoked widespread resentment among the locals as heaps of domestic and market waste are lying scattered across the town.

Notably, the Sopore town in north Kashmir has been craving for a proper dumping site for the last many years and which is not yet being considered by the government.

Locals said the garbage being collected by Municipal council from various areas is being dumped along the road here that emanates foul smell making the pedestrian movement difficult.

“Garbage dumped in front main road at market here has become a nuisance for residents,” the local said.

They said that the stink emanating from the garbage makes it hard for them to breathe while the situation gets worse during rain.

The locals’ further said that even the garbage being on roads has also adversely affected the business in the town while the admission is quietly watching the deteriorating situation in the area.

“Dogs are always seen in many areas as they keep searching for food in these dumping spots, posing a threat to locals particularly students,” Mehnaz a local female student said.

She said that the authorities should think about this as soon as possible.

Zuhaib Ahmad, another local, said that the authorities have turned a blind eye toward this issue. “Many a time authorities do not lift garbage from the place even in the evenings,” he said.

“The garbage emanates a foul smell and has become a health hazard for the people. It also attracts dogs, cattle and insects,” Ishfaq, a local shopkeeper said.

Meanwhile, despite repeated attempts, the officials at Municipal Council (MC) Sopore didn’t respond to repeated calls from this reporter. (KNO)