Someday India will have whole of Kashmir including PaK: IAF official 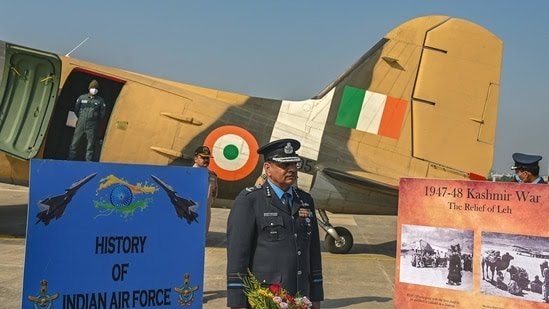 Air Officer Commanding-In-Chief, Western Air Command, Air Marshal Amit Dev has said that he is sure if UN would not have intervened in 1947, perhaps the entire Kashmir would have been the part of India today.

He was talking to reporters on the sidelines of a function to celebrate 75th year of Air landed operations of Indian Army at Central Kashmir’s Budgam Airport.

Air Marshal Amit Dev as per news agency Kashmir News Trust said that he is sure that someday the part of Kashmir under Pakistan will also join Indian Kashmir and they will have the whole of Kashmir in years to come.

While responding to a question, Dev said history is testimony to the fact that nations are always one. He said in both parts of Kashmir, people are same and history is witness to the fact that nations always unite. He said they don’t have any plan at this moment to get that part of Kashmir but God willing it will always be there because people in that part of Kashmir are not being treated very fairly by the Pakistanis.

While down playing the recent threat from drone attacks, Amit Dev said that drones don’t cause massive damages. “We had already prepared equipment to counter drone attacks and those had been even deployed here. We will procure more equipment and deploy that but drone attacks are minor threats,” he added. (KNT)