Some people not happy with peace in J-K : LG Sinha 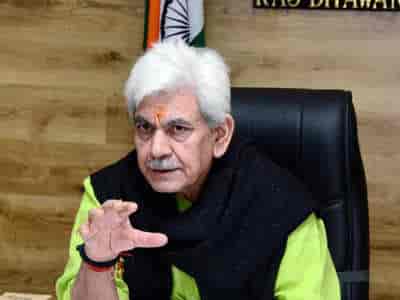 Jammu and Kashmir’s Lieutenant Governor Manoj Sinha Friday said that some people aren’t happy with the peaceful atmosphere, tourism boom and round the clock development in the UT and make continues efforts to provoke security forces in a bid to fuel street protests.

Speaking at the launch of District Export Plans at SKICC on the banks of Dal Lake, the LG said that while majority of people are heaving a sigh of relief in Kashmir but some people aren’t happy with the prevailing peaceful atmosphere, tourism boom and development taking place in the UT.

“These people make continuous efforts to provoke security forces to commit a mistake that can set base for street protests. However, our forces are alert and working hard to cement the peace and foil all anti-peace plans,” the LG said as per news agency—Kashmir News Observer (KNO). He, however, didn’t name the people who aren’t happy with the peaceful atmosphere in Kashmir.

He said that J&K is on the path of huge development and in the years ahead the region will emerge as a model place in the country in terms of development and investment. “Kashmir will also host the G-20 summit which will give a big push to J&K’s investments,” the LG said.

Later talking to reporters, the LG Sinha said with the Prime Minister Narendera Modi’s personal intervention, J&K is working on district export plans and in the next five years, J&K will get a big push on the export front and the UT’s export potential is all set to increase. (KNO)