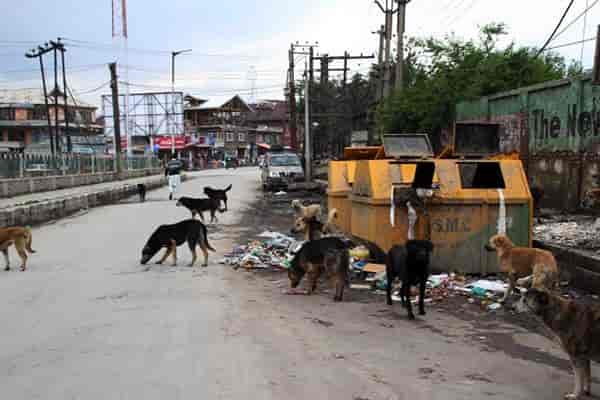 A whopping 60000 dog bite victims have reported to Anti Rabies Clinic at Srinagar’s Shri Maharaja Hari Singh (SMHS) hospital over the last ten years, an official report has said.
As per a recent report by Department of Community Medicines at the Government Medical College (GMC) Srinagar, around 10000 persons are bitten by dogs every year in municipal jurisdictions of Jammu and Srinagar cities.
The report was shared in a video format on Kashmir Health, a YouTube channel created by the Department of Community Medicines with support of National Health Mission as part of an initiative to make the public aware about the health related issues.
The population of dogs in Jammu and Kashmir has crossed one lac as per the report.
The presence of dogs on every nook and corner has led to man-dog confrontation due to which the number of cases of dog bites have increased in the region.
“If a person has come in contact with a dog but has not been bitten by it, then as per the World Health Organization, the person is safe and does not need to go for a vaccine,” said Mohammad Salim Khan, Head of Department at Community Medicines.
If the person is bitten or scratched by the dog but there is no bleeding then there is an urgent need for an anti rabies vaccine, said Khan. “But if the person starts bleeding then he needs the vaccine as well as immunoglobulins,” he added.
The anti rabies clinic of SMHS hospital has received these cases of dog bite victims between the years 2012-2019, out of which 80 percent persons belonged to Srinagar.
Mostly children and elderly people are attacked by dogs and many of them as per the report suffer from rabies virus.
The general symptoms of rabies include headache, fever and tiredness, the doctor said.