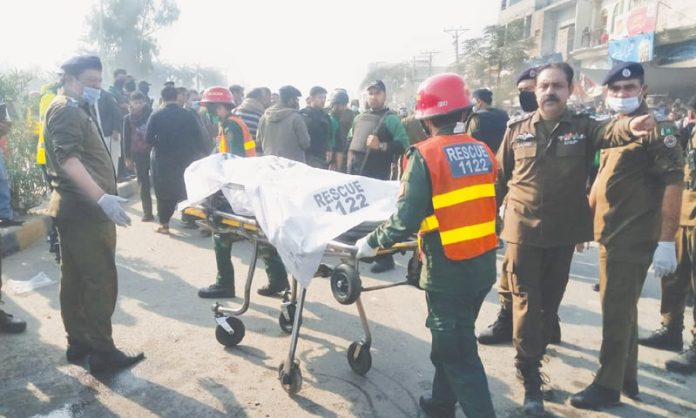 Sialkot: Following the lynching of Sri Lankan factory manager Priyantha Kumara in Sialkot over blasphemy allegations, new footage on Saturday showed that a colleague of the man tried to protect him from the mob prior to the ghastly incident, reported The Dawn.

Kumara as per the newspaper was tortured to death and his body was set on fire on Friday. The employees of Rajco Industries, located on Wazirabad Road, had staged a protest on the premises on Friday alleging that he had committed blasphemy.

The protesters had suspended traffic on Wazirabad Road and were joined by all the factory workers and a large number of locals. On seeing the mob gradually swell from a few dozen to hundreds, Kumara had dashed to the roof.

Footage shot prior to the lynching showed a colleague trying to protect Kumara on the roof of the factory where he had fled while the mob of around two dozen people slowly grew in number.

In the video, some among the mob can be heard chanting slogans and saying “he (the manager) will not escape today,” while the colleague tried to shield Kumara with his body, who clung to the man’s legs.

The workers had later overpowered the colleague and dragged Kumara out on the road and tortured him with kicks, stones and iron rods, killing him on the spot. The mob had then set the body on fire.

Kumara, a Sri Lankan Christian, had been working at Rajco Industries for 10 years.

Reacting to the “horrific vigilante attack”, Prime Minister Imran Khan said it was a day of shame for Pakistan. “I am overseeing the investigations & let there be no mistake all those responsible will be punished with full severity of the law. Arrests are in progress,” he tweeted.

On Saturday, Special Assistant to the Punjab Chief Minister on Information Hasaan Khawar updated the number of arrests to 118, saying that 200 raids had been conducted and that among those detained were 13 primary suspects.

In a press conference in Lahore alongside Punjab IGP Rao Sardar Ali Khan, the special assistant said the police had obtained footage from 160 CCTV cameras and additional video and data sources such as mobile data and call records were also being analysed.

“There has been considerable progress and the investigation is continuing,” Khawar said, adding said that the body would be handed over to the Sri Lankan embassy through the interior and foreign ministries.

“I want to again reassure you that justice won’t only be carried out but will be seen to be carried out,” he said, adding that no leeway would be granted to anyone and action would be taken even if officials were found to be negligent in their duties.

The IGP provided a timeline of Friday’s events, saying that according to the information received so far, the incident began at 10:02am on Friday and escalated to violence and beatings around 10:45am, leading to Kumara’s death at 11:05am. He said the police was alerted to the incident at 11:28am and reached the spot at 11:45am.

The IGP said a challan would be submitted in an anti-terrorism court as soon as possible to bring the culprits to justice.

Sri Lankan Prime Minister Mahinda Rajapaksa said he was shocked by the brutal and fatal attack on the manager.

“My heart goes out to his wife and family. #SriLanka and her people are confident that PM [Imran Khan] will keep to his commitment to bring all those involved to justice,” he tweeted on Saturday.

Foreign Minister Shah Mahmood Qureshi called Kumara’s lynching a “tragic incident” and “a matter of shame” for the country.

In a press conference in Lahore on Saturday, Qureshi said the incident was being monitored at the highest state levels, with Prime Minister Imran Khan overseeing the investigation.

“We are in contact with Sri Lanka […] we kept their high commissioner updated moment-by-moment and I want to share that they have appreciated Pakistan’s stance and prompt reaction.

“This is an incident that has pained everyone … but they think that ‘we can’t blame an entire segment or country because of this.’ They [do] expect that Pakistan will bring those responsible to justice.”

Qureshi added that he would contact the Sri Lankan foreign minister today and update him on the latest developments. “They think this is a tragic act but the Pakistani government and nation have no link with it,” he added.

Former chairman of the Central Ruet-i-Hilal Commi­ttee Mufti Muneeb-ur-Rehman condemned the incident but called on the media to desist from attributing blame to any group or individual before completion of investigations into the matter.

He said there was no ground to take the law into one’s own hands when a constitutional and legal system was present in the country despite whatever deficits it may have.

“Anarchy and lawlessness spread in society, which are not in any way beneficial for the country, and a negative image is created of the country on the international level,” he is quoted as saying in a statement.

Lieutenant Governor Manoj Sinha Friday said that the administration is going to conduct the re-exam of Jammu and Kashmir...
Kashmir