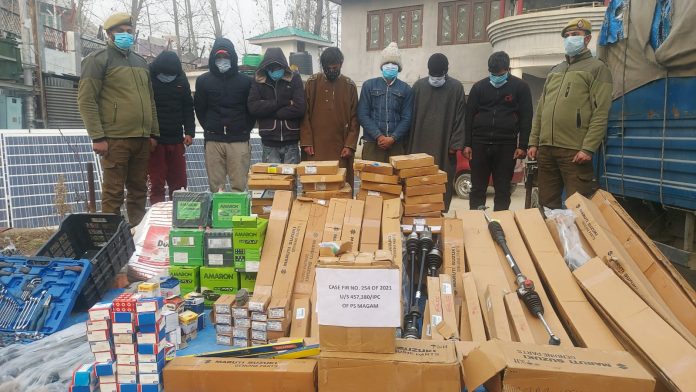 Budgam: Police in Budgam claimed to have solved a burglary case by arresting seven accused persons involved in the commission of crime besides, recovering stolen property worth lakhs of rupees.

Accordingly, a case vide FIR No. 254/2021 under relevant sections of law was registered in Police Station Magam and a special team headed by SHO PS Magam was constituted to investigate the case.

During the course of investigation, the special team zeroed in on some suspects and they were called for questioning. During questioning, one of the suspects namely Imran Hassan Mir son of Manzoor Ahmad Mir resident of Kakarpora Mirgund Pattan confessed his involvement in the commission of crime. The team also recovered stolen property from the premises of his residential house which he had concealed in a tin shed. He also confessed the role of his two more accomplices who had hatched the criminal conspiracy and actively participated in the commission of crime. Both the accused persons identified as Yawar Abbas Malik son of Ashiq Hussain Malik resident of Lashkar Mohalla Nishat and Aijaz Ahmad Malla son of Ghulam Mohammad Malla resident of Dewar Parihaspora were subsequently arrested.

The investigating team also learnt about involvement of another accused person namely Syed Akther Shah son of Syed Mustafa Shah resident of Parihaspora Pattan & on his disclosure stolen property which he had concealed at his workshop near Shadipora Crossing was recovered. Following more leads, the investigating team arrested two more accomplices of this burglary gang identified as Pervaiz Ahmad Guroo son of Ab. Ahad Guroo resident of Narayan bagh Ganderbal and Irfan Hussain Sofi son of Muzafar Ahmed Sofi resident of Dabb Ganderbal & recovered stolen property which they had concealed at their workshop at Dub Ganderbal.

Furthermore, the team arrested one more accused person identified as Zulfkar Ahmad Dar son of Gh. Hussain Dar resident of Chenabal Mirgund Pattan who was also part of the crime and had used his vehicle Maruti-800 bearing registration number PB10AG-9210 for the commission of crime. The vehicle was also seized from Wushan Kangan Ganderbal.

All the accused persons have been shifted to Police Station where they remain in custody. Stolen property which include 32 Clutch Plates, 16 Axle’s, 28 bearings, 17 desk pad’s, 08 batteries & other accessories worth about ₹05 lakh rupees have been recovered so far and further investigation is in progress.

Police warns of strict action against those individuals found involved in any kind of criminal activity.