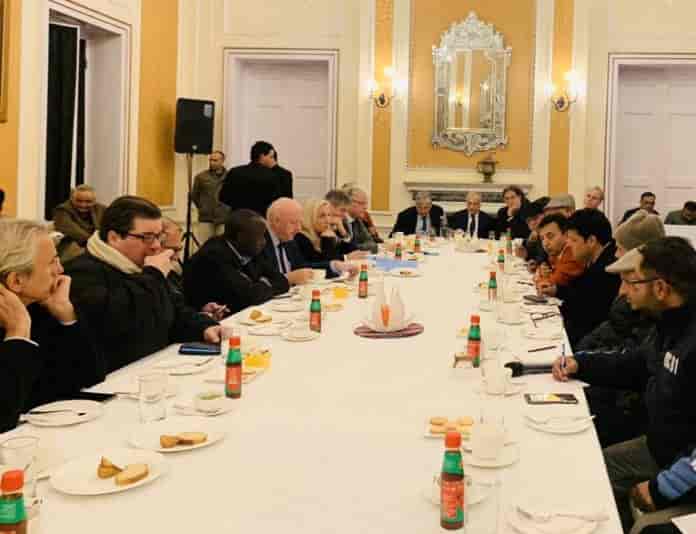 Srinagar: The 25 foreign envoys who arrived in Srinagar on Wednesday spoke in different tones even though majority of them evaded media. One of the ambassadors from Afghan stated that he saw shops open all around in Srinagar while as the Mexican envoy said that they were in Srinagar as tourists.

Some of the members in the delegation belonged to Germany, France, Canada, Afghanistan, Czech Republic, Poland and Hungary. After spending in a day in Srinagar, the envoys will travel to Jammu on Thursday after interacting with the representatives of civil society in Kashmir.

The envoys are likely to be briefed by senior officers in Srinagar about security situation Kashmir, a security official told KNO.

Talking to media men after having a Shikara ride in the famous Dal lake in Srinagar, Afghan envoy Tahir Qadiry said: “We saw schools and shops were open on our way from the Airport to the city.’’ He tried to explain that all was well in Srinagar.

“Kashmir is a part of the world that I always wanted to see,” Qadiry said. However, Mexican ambassador said: “Kashmir is a beautiful place. We are here as tourists,” he said.

A third envoy said they have come to J-K see how is the situation in J-K. “We are here to see and assess the situation,” he said without revealing his name.

Amid tight security the delegation checked into a five start hotel in Srinagar on the banks of famous Dal lake. This is the third group of foreign diplomats visiting Jammu and Kashmir after the revocation of Article 370 on 5 August.

On 9 January a delegation of 17 foreign envoys including US ambassador Kenneth Juster visited J-K.

The delegation will also meet business representatives and others during its stay in Srinagar and Jammu. A group of journalists will also be reportedly meeting them. In Srinagar, they will enjoy a cultural show in the evening at SKICC here.

Official sources said that on Thursday, the envoys will visit Jammu where they will be meeting with the Lt. Governor Grisigh Chandera Murmu. The visit also comes days after the stringent Public Safety Act (PSA) was slapped on former Jammu and Kashmir chief ministers – Omar Abdullah and Mehbooba Mufti. (KNO)

Previous articleMinor Dalit girl raped by 10 persons for six months
Next articleSafe to eat chicken or mutton without fear of getting coronavirus: DAK