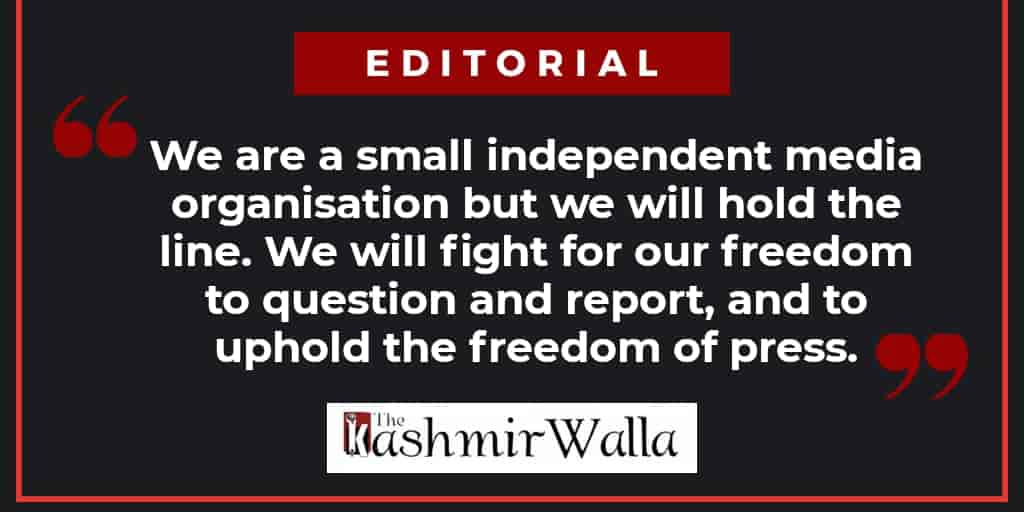 Jammu and Kashmir (J-K) has been under the direct control of bureaucracy since June 2018, when the BJP pulled out of the last elected government leading to its fall. After 5 August 2019, however, the already opaque bureaucracy was emboldened even further to centralize the administration and issue arbitrary diktats and policies.

The “new media policy” is one such measure and its sole purpose is to defang Kashmir’s vibrant media and put it under the control of the officialdom.

Three months ago, on May 15 precisely, the administration armed itself with a media policy to appoint bureaucrats and security sleuths to play editor and determine what is and isn’t journalism and accordingly pass verdicts which will have serious consequences on the professional freedom of journalists in Kashmir. Holding a gun to their heads, the administration intends to shut up journalists and thus enforce silence.

Ever since the unveiling of this media policy, Kashmir’s press has been in total disarray. It has started self censorship to avoid the wrath of the Orwellian overlords, thereby leaving a crucial gap in Kashmir’s first draft of documented history for the past year or more. This policy has in fact given legal cover to a long established practice employed by consecutive governments to covertly muzzle the press in Kashmir.

Through this policy, the administration can also obfuscate the truth behind the government policies and disallow the citizens to know the hidden details and purpose of such moves. The  aim of this policy is to completely discredit and destroy the already ailing institution of journalism in Kashmir and turn all modes of mass  communication into a one way channel where the government decides what a citizen can know. This media policy in essence goes against the very basics of participative governance to exclude the citizens and deny them a say in matters of public importance. When the bureaucrats and the security czars determine what is good for public consumption, it is going to lead to a complete lack of an informed discourse within the society. The policy also makes any violation of the whims and fancies of the officialdom regarding good and bad journalism by a professional journalist a criminal offence. This provision is going to be a legal tool to intimidate those journalists who do not fall in line and refuse to metamorphose into mere stenographers, reproducing government views alone.

Keeping in view the serious danger that this policy poses to press freedom, The Kashmir Walla had also written a three-page letter to the only elected media body in Kashmir – the Kashmir Press Club on on 8 July 2020 and sought the KPC to formulate immediate and concrete steps to force the withdrawal of this draconian media policy which includes mounting a formal legal challenge. [you can find the letter here and you can find the response from KPC here].

This policy also provides the bureaucracy a legal sanction to evade accountability because the journalists can’t question their decisions without the fear of legally approved reprisals. Even if the journalists are not booked in cases for legitimately questioning the government, this policy provides enough room for the law enforcement agencies to summon and question them.

This June, freedom of press was tried in a court of law in the Philippines when an independent media house, Rappler was accused of cyber libel. While reacting to this trial, editor of Rappler, Maria Ressa, had said: “You don’t really know who you are until you’re forced to fight to defend it … We will hold the line.”