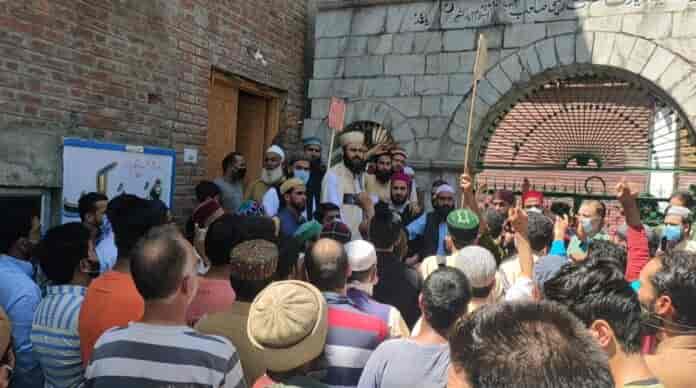 Srinagar: Locals on Tuesday in south Kashmir’s Anantnag held a peaceful protest against the ‘blasphemous’ remark against Prophet Muhammad (SAW) and raised slogans, demanding stern punishment to the accused.

Rally was taken out following noon prayers from Jamia Masjid Anantnag under the leadership of Qazi Yasir,  of Ummat-e-Islami.

A protester while speaking to The Kashmir Walla said that the culprit should be hanged, ” The person should be punished, because he committed blasphemy and hurt sentiments of Muslims around the world,” said Sheezan.

The protest was in continuation of protests against the blasphemous comment by a Hindu priest in India.

The policemen tried to block the gates of the mosque, however people in larger numbers moved forward shouting slogans against the blasphemy, news portal The Kashmiriyat reported.

Police later raided the house of Qazi Ahmed Yasir who went into hiding.

Previous articleCOVID-19: Financial Commissioner H and ME holds top-level meeting with Ehsaas International, others
Next article“Aren’t you home yet?”: In cop’s killing, ten-member family lost hope